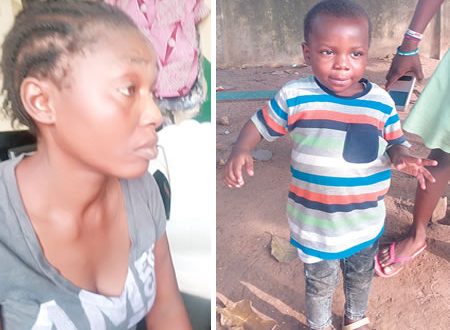 Child-stealing and selling have attained a worrisome dimension in Delta State with a Delta-based anti-human trafficking agent, Mr Joshua Omorere, accusing security operatives of working underground to shield an allegedly self-confessed, serial child trafficker, Mrs Juliet Philips, who had been nabbed, from prosecution.

The criminal venture has become so lucrative and preponderant that a Child Rights Activist, Comrade Ighorhiowhunu Aghogho also had to petition the Director-General of the Department of State Security, (DSS), Mr Yusuf Magaji Bichi, to protect all children who are victims of illegal adoption from 2008 till date and arrest the perpetrators whom, he alleged, are mainly officials of the Delta State Ministry of Women Affairs.

But in his chat with Nigerian Tribune in Warri, Mr Omorere said after spending close to N150,000 in concluding an investigation on Mrs Philips with the help of police operatives in A Division of the Warri Area Command, a directive came through the Warri Area Command to transfer the case to Asaba for another round of money-intensive investigation.
Omorere described Mrs Philip, who’s currently in detention at Warri A Division, as an unrepentant, serial child trafficker whose atrocities over the years must be brought to justice to serve as a deterrent to others peddling the same criminal business in the state.

He suspected that the transfer directive, which has now been reversed, was a ploy to frustrate the case that was supposed to be charged to court in Warri on March 4, but was halted by the Area Commander, Mr Muhammad Shaba, who was on duty during the visit of President Muhammadu Buhari to Warri.

He alleged that a man who bought the child Mrs Philip stole, who’s a pastor in one of the fastest growing Pentecostal churches, was the one “pulling strings with the help of a Deputy IGP” to bury the case.

Omorere, who’s a member of the Delta State Anti-Human Trafficking Agency and founder of the Nigerian Child Welfare Fund, said Mrs Philips allegedly stole a twin boy (name withheld) after feigning to help the boy’s mother secure a source of livelihood at Igbudu Market in Warri Local Government Area of the state.

According to him, “On the 28th of November 2018, one Mrs Juliet Philips stole a child from one woman they call Evelyn Pendar. Evelyn Pendar lives at Eruewoarie village. She comes from there with her twin boys of about two years old to beg at Effurun market.

Mrs Philip took the woman to Igbudu Market with the promise of giving her a job. On their way going, she helped Evelyn Pendar to carry one of the children because they were taking a nap. When they got to the market, she paid her transport fare and asked the woman to pay for herself and the woman agreed.

“While she was yet waiting to collect her change from the tricycle driver, Mrs Philip disappeared with the child. The woman cried out to Effurun Market to one Mrs Glory.

Mrs Glory normally helps her with clothes for her children. Glory was crying as Evelyn was narrating her ordeal to her. As she was crying, one customer came to her shop and asked them what the problem was. They narrated what happened to the customer. The customer then gave them my number to call me, and that was how I came into the matter.”

Mr Omorere said he went ahead to table the case at the Warri Area Command and after much investigations, he discovered that the suspected child trafficker was the same woman who allegedly stole three children of same parents in 2017 at Ekpan Primary School and has been in his wanted list.

We found out and got her husband arrested, immediately. The same day, the husband called her and said ‘please bring the children that you stole; I have been arrested and I’m in Ekpan Police Station.’

“Three hours later, almost the same time, she dumped the children at Bunkery Junction at Ekpan Road and later came to the station. She said she was not in possession of the children, but while I was insisting that she should be charged to court, the police let her off the hook!” He noted.

Omorere said they eventually discovered that it was the same Mrs Philips who made away with Mrs Pandar’s boy at Igbudu Market in November 28, 2018 and she was subsequently picked up with her husband on January 30, 2019 at her house at Orhuwhorun along Usiefu road in Udu Local Government Area and paraded along six other women at the Ekpan Police Station.

He further disclosed that Mrs Pendar was asked to identify her (Mrs Philip) in the midst of six other female suspects and she did after which the latter confessed that she actually stole the child and sold him at N900,000, adding that N850,000 was paid into her account, and N50,000 cash was given to her.

Omorere further disclosed that when Mrs Philip stole the boy, she took him to her mother’s registered Deliverance Orphanage Home at Ozoro. “Her mother’s name is Madam Christiana Onitsha. From there, the mother contacted a retired director in the Delta State Ministry of Women Affairs, Mr. Collins Ogbor, who linked her to the people who bought the child.”

As a result, Mrs Philip, her mother Mrs Onitsha and Mr Ogbor were arrested after which Mr Ogbor confessed that the boy was handed over to his sister who works at the Federal Ministry of Information, Asaba, who, in turn, handed over the boy to her brother, one Pastor Peter in Benin.

The boy was eventually retrieved from the pastor by the police and all the suspects involved arrested and were to be charged to court in Warri on March 4, 2019 before an order reportedly came that the case be transferred to Asaba.

Meanwhile, while speaking to the Commissioner of Police, Delta State Police Command, Mr Yinka Adeleke, on phone on Tuesday in Warri, he said he had already given a directive to the Warri Area Commander, Mr Muhaamad Shaba, to swiftly charge the case to court for diligent prosecution.

Adeyinka, who was recently posted to the oil-rich state, refuted the allegation of the hierarchy of police attempting to bury the case, retorting further that he reserved the right to transfer and prosecute any case anywhere.

On further inquiry from Mr Omorere, he confirmed the directive that the case be prosecuted in Warri, adding that as a member of the Delta State Anti Human Trafficking Agency, “it’s our duty to ensure that anybody caught trafficking a child will pay for it. He or she will face the full wrath of the law. And this is the only business Juliet Philip does – stealing and selling children. We don’t know whose child she will steal next; it may be my child or your child.”