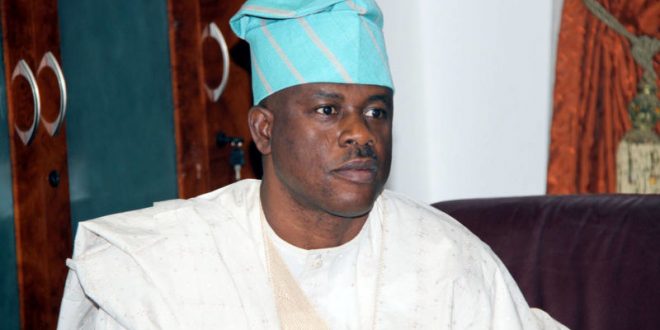 Senator Musiliu Obanikoro, a former  minister of state for Defence, may have made up his mind to dump the Peoples Democratic Party, which he joined while in the Senate more than 10 years ago.

According to The Nation, Obanikoro who ran in 2011 as governorship candidate of the PDP in Lagos State will soon pitch his political tent with the ruling All Progressives Congress (APC).

The Nation quoting reliable sources said  Koro, as he is fondly called, has been making overtures to leaders of the ruling party as part of efforts towards his joining the APC.

The Newspaper said baring last minute changes, the former governorship candidate of the PDP will join APC in a matter of days.

According to sources within the ruling party in Lagos State, leaders of the APC will be discussing the defection plan of Obanikoro this week.

The decision to look into his request to join the party followed what some sources described as a positive nod from the national leader of the party, Asiwaju Bola Ahmed Tinubu.

It was however gathered that Tinubu initially showed reluctance to Obanikoro’s return to his political camp which he deserted over a decade ago to join the then ruling PDP. But the national leader soft pedalled on his stance after the former Minister reached out to some prominent Lagosians to intercede on his behalf before Tinubu.

The Nation gathered that Tinubu eventually agreed to meet with his erstwhile godson after much pleading. “It was after the two met that Obanikoro started getting good response from APC leaders in his quest to join the party. Many prominent Lagosians, including monarchs and business moguls, intervened on his behalf.

“And when he met Asiwaju, he apologized profusely for his past misdeeds and political miscalculations. You know Asiwaju has a large heart. It appears he forgave him and gave a positive nod to his quest to join the APC. Following that, Obanikoro met and discussed with several other party leaders.

“It is likely that the party leadership will formally discuss his request to join the APC this week. It is most likely that he will be considered positively. On his part, the former Minister is not leaving anybody in doubt that he is ready to join the ruling party. There are even talks that he nurses a return to the senate on the platform of the APC come 2019,” our source added.

FORMER Governor of Enugu State, Sullivan Chime on Saturday formerly registered as a member of the All Progressive Congress (APC)

Chime’s registration came with a declaration from the national chairman of the party, Chief John Odigie-Oyegun that he was not joining the APC because the EFCC is investigating him.

Some of the top dignitaries at the event included Sokoto State Governor, Alhaji Aminu Tambuwal, members of the APC national working committee members, the Director-General of Voice of Nigeria (VON) Osita Okechukwu.

Nigerian Tribune observed that Chime was registered as a member of the APC in a session coordinated by the National organizing secretary of the party, Senator Osita Izunaso. He was thereafter issued with a membership card No 0669001.

In his speech, the National chairman of the Party, Oyegun described the crowd as overwhelming, declaring that “I have been to the South-East several times but this is by far the greatest crowd.

“I am happy to be here today; change has totally come to Enugu State; people keep joining but for me, the South-East is special. It is special because for too long you have been deprived.”

While describing Ndigbo as the most intelligent, the most industrious and the most accommodating, Oyegun added that time had come for them “to reap the fruit of your labour.

“Part of our plan is to ensure that South-East returns to the mainstream of Nigeria politics. It is important because I grew up‎ to know Nigeria as being balanced on a tripod. Can the the other two stand alone?”