LAGOS: FATHER RAPES DAUGHTERS AT KNIFEPOINT FOR MANY YEARS 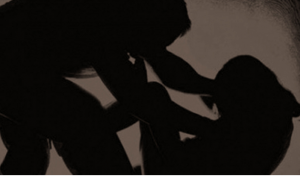 LAGOS:
FATHER RAPES DAUGHTERS AT KNIFEPOINT  FOR MANY YEARS
A father, Chukwuma Eze, accused of defiling his teenage daughters, has been remanded at the Kirikiri Prison in Lagos on the orders of an Ikeja Sexual Offences and Domestic Violence Court.

Eze, a resident of No. 2, Agbeke Close, Iyana-Era, Coker Bus stop, Ijanikin, Lagos, was arraigned on a two-count charge bordering on defilement before Justice Abiola Soladoye.

He, however, pleaded not guilty to the charges.

The prosecutor, Mrs. T. Olanrewaju-Daudu, told the court that the defendant had unlawful sexual intercourse with his two daughters, aged 16 and 17, several times between 2008 and 2017 at his residence.

The prosecutor said that the defendant started defiling the girls when they were seven and eight years old, after the death of their mother.

“Eze defiled the girls at knife point, threatening to stab them if they resisted him or told anyone,” she said.

Olarenwaju-Daudu said eight witnesses are scheduled to testify against Eze during the trial and requested that the defendant who attended Monday’s proceedings from home, be remanded in prison custody.

Granting the request of the prosecutor, Justice Soladoye ordered that Eze be remanded at the Kirikiri Maximum Security Prisons till Oct. 28, when the case will come up for trial.

The defendant, on hearing he was to be remanded in Kirikiri Prisons, broke down in tears and begged the court for mercy.

“I was in the police station since, please ma, I have children, some people have been taking care of them. I cannot run,” Eze tearfully told the court.

The prosecutor, however, interjected and said “my lord, the alleged victims are these same children, he is the biological father of the girls.”

The offences contraven Section 137 of the Criminal Law of Lagos State, 2015 which stipulates life imprisonment for the offence of defilement.