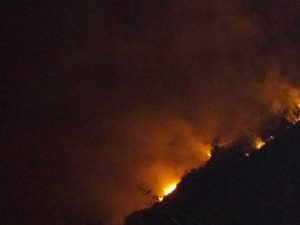 A mother and daughter, simply identified as Carol and Favour respectively, have reportedly died from a fire accident, which razed down a building in Eku, Ethiope East council area of Delta state.

The Nation learnt the incident may have been caused by adulterated kerosene.

The tragic incident that occurred during the weekend also recorded three others severely injured in the inferno, which destroyed some property including a commercial shop and a nearby caravan.

Although details about the cause of the fire were still sketchy as at press time, a witness said the fire started when Carol, a kerosene dealer, was selling the product to a customer.

According to the source who spoke on condition of anonymity, late Carol’s shop, in the process of selling, caught fire which spread to other kerosene kegs and then, set the entire building ablaze.

The witness disclosed that Carol who was with her daughter at the time was instantly burnt to death, while Favour died as she was being rushed to the hospital.

Speaking on the cause of the fire, the source stated that the fire may not be unconnected to the adulterated kerosene being sold by the victim.

While sympathizers have searched the wreckage for other occupants who may have been trapped in the fire, residents have been thrown into mourning.

Confirming the report, the Delta State Commissioner of Police, CP Adeyinka Adeleke, said only one life was lost in the raze.

He said: “Only one person died. The fire was as a result of a woman selling adulterated kerosene and fuel (petrol) in the house.”

@CitizenOsun
Previous HOT ABDOMINAL COMPRESS AFTER CHILDBIRTH NOT NECESSARY ­ —Expert
Next LAGOS: FATHER RAPES DAUGHTERS AT KNIFEPOINT FOR MANY YEARS