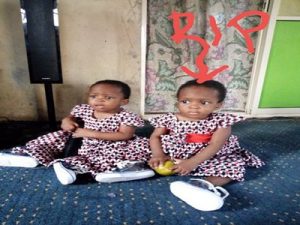 HOW DOCTOR’S NEGLIGENCE LED TO THE  DEATH OF MY DAUGHTER

A distraught father, Adeola Adetunji, has cried out for justice after his 15-month-old twin daughter, Taye, died at a private clinic owned by a paediatrician with the General Hospital in Igando, Lagos, identified simply as Dr. Joy.

The man said he was angry because he had asked his wife, Taiwo, to take the child to the General Hospital on Sunday evening after she informed him that she was running temperature.

But rather than attend to the child, the paediatrician, Adetunji alleged, lured his wife to her private hospital in Egbeda (HJ Clairoowen Medical Centre and Maternity), where blood was administered on his daughter without screening, in an unkempt environment and with no supervision.

Findings by our correspondent showed that it was a trend at most general hospitals for doctors to woo desperate patients or their families to their clinics under the guise of providing better care, only to exploit them.

Health Commissioner Dr. Jide Idris has ordered investigation into the circumstances that led to the death of the child, as well as allegations of patients poaching by doctors from government hospitals to their private clinics.

“I need to find out more about this from the managing director. The issue of doctors and nurses wooing patients is being continuously addressed as this is brought to our notice. We are using independent monitors to address this. I will investigate this. I have asked the PS, and the HSC to investigate it,” said Idris.

Speaking to our correspondent yesterday at the private clinic located at 10, Busari Street, Egbeda, Adetunji said he was only interested in justice and to save other families from falling victims of such unprofessional conduct by medical practitioners.

He said: “I have twin daughters who are one-year-and three-month-old. The one who died is Taye. I work in Ogun State, so, I was not around when it happened. But my wife had called me after they returned from church on Sunday that she observed Taye was running temperature.

“I told her not to administer any drug but to take her to the General Hospital, Igando because my house is at Igando. Not up to three minutes when they got to the hospital, she called again that the doctor who saw my daughter (Dr. Joy) had referred them to a private hospital

“I asked if they were attending to them, she said yes.  Later around past 11pm, as I was about sleeping, I was informed that my child had dead. I rushed down to Lagos on Monday morning, met the doctors at the clinic and my family.

“When my daughter was brought to this place, Dr. Joy wrote a referral on a discarded duplicate slip she picked on the floor and on it, she wrote Dr. Dayo that he was the one my wife would meet that he had spoken to him.

“But when I got here, I saw the doctor’s (Dr. Joy’s) husband trying to intimidate my family. He was even threatening my grandma who came to the hospital with my wife. I flared up and he came to fight me that we wanted to spoil their name, but when they saw that we stood our ground, they started begging us.

“On Monday night, Dr. Joy and her husband came and were apologising that they knew they made a mistake.

It was not just a mistake, it was a costly mistake which arose from their selfishness and greed.

“My wife paid N29,000 that night. N20,000 was for blood, N2,000 for file and then other fees they charged them. They put blood on my daughter without checking her blood group. They didn’t check my wife and from what my wife told me, Dr. Dayo Badmus just put the blood and left the child. No supervision.

“She said she noticed the child was reacting and called the doctor’s attention, but they told her it was normal that the blood was circulating in her body and that’s how my daughter died.

“My daughter cannot come back to life, but I cannot keep quiet on this because it will happen to other innocent people if nothing is done. I will fight it. Already, we have reported at the Human Rights at Igando Police Station. We have met with the Medical Director of General Hospital, Igando, (Dr. Madewa Adebajo) and in our presence, he told Dr. Joy she acted unprofessionally. He said we should give them 24 hours to investigate.”

Narrating what transpired, the child’s mother, Taiwo, told our correspondent that she arrived Igando General Hospital around 6pm on Sunday and Dr. Joy touched the baby’s eye and told her she needed blood and oxygen.

“She said the baby needed blood and oxygen, that there was no bed space and that she would refer the baby to another hospital. She called someone there and said the blood would be ready before we got there. She collected blood from the baby and she said there was no need to collect blood again to make it fast.

“She did not tell me initially that it was her clinic. It was the first time I would be at Igando General Hospital. We got there around past 8pm and immediately, they put the blood on my baby, she reacted and bit me.

“I tried to remove the thing from her hand, but the doctor (Badmus) said I should not take it off that I should hold my baby’s hand very well. When I noticed she was reacting, I called the doctor’s attention, but they said it was normal that the blood was circulating in her system.

“Suddenly, I noticed she was breathing slowly and she gave up the ghost in the process. They killed my daughter, that is all I know. It was only temperature my baby was running, but my husband insisted I should take her to the General Hospital, Igando because they have specialists there.

“I was not charged any fee at the General Hospital, but she said the blood is N20,000. They collected N29,000 at her hospital and card fee N2,000. We got there around 8pm. It is a lie that my baby was shaking when we got to her hospital. It was the blood she reacted to and started shaking and then died,” said the woman.

Our correspondent made efforts to see Dr. Joy both at Igando General Hospital and her private clinic without success. She was contacted on the phone for her side of the story, but she insisted on physical meeting, saying “it was not a telephone discussion.”

Asked why she referred an emergency case from the General Hospital with all facilities to handle it to her clinic with no standard equipment, Dr. Joy admitted she erred.

Dr. Joy pleaded with the bereaved family through calls and text messages sent to them for settlement that her employment at the General Hospital had been terminated.

“Please change your mind, let’s act like a family. Please let’s sit down and talk about it. Please, wherever you are I will come and meet you. At least I came out last night. I just want to see you and talk. That is what I am after. Right now I do not have a job.

“I really understand you and what you stand for. From my heart, my aim in all this was to save the child, though the process was wrong,” she reportedly said.

At the hospital, Badmus denied he ever claimed to be a doctor, insisting he was a nurse and did not know why Dr. Joy addressed him as Dr. Dayo in the referral.

“I am the registered head nurse here. I never claimed to be a doctor. The man came in yesterday and we tried to talk to him, but he wouldn’t listen.

“The baby was rushed here on Sunday. It was an emergency. Before they got here, Dr. Joy gave the mother my number from the General Hospital. She also called me that they were coming.

“Dr. Joy is the owner of the hospital. I was not the one that did the blood infusion, it was Dr. Joy herself. The blood was brought by the lab man and it was screened. A test was done by the lab man and it showed the baby’s blood group was O+. I do not know the details of the referral, Dr. Joy is in a better position to answer those ones. I do not know about the clinic’s registration details, I am new here” he said.

Checks with the police confirmed that the family had lodged a complaint and the doctor invited for questioning by the Igando Division.

@CitizenOsun
Previous LAGOS: HOW WE KILLED A TAXIFY DRIVER AND STOLE HIS CAR – Suspect
Next FCT: COURT SENTENCES “YAHOO” NATIVE DOCTOR TO 97 YEARS IN PRISON