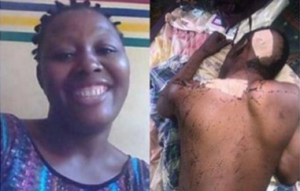 A 32 year old house wife, Mrs Rebecca Efeitima, of Amukpe area, in Sapele, Delta State on Tuesday poured hot water mixed with pepper on her husband, a 43 year-old-man Monday Efeitima over what neighbours described as her ‘usual behaviour’

Monday told Vanguard on his hospital bed at a private clinic in Sapele, that he did not quarrel with his wife and her initial intention was to poison him and when she did not succeed, she decided to disfigure him.

Monday said, the trouble started on Tuesday ” I can’t remember quarrelling with her but I had hardly sat down after returning from work when she brought me food to eat. It was unusual from her, most times if I come from work I have to practically beg or cajole her for food before she will bring it. I was suspicious, so I refuse to eat the food. But to please her, I threw away the food when she went to take her bath, and when she came back, she sat with me and was asking if I was feeling anything, I told her no. She then went outside, got a pot of hot water, added pepper and when I was sleeping she poured the water on me.”

The man said while crying in pains.

Vanguard learnt that it was not the first time Rebecca tried to kill Monday ” It is her usual behaviour, he had tried to kill him several times without success, so it’s not surprising to us. His problem is that he loves the woman too much, she wanted to poison him in November last year but only end up poisoning the first son, she had for another man and when we advised him to leave the woman, he said he would still keep her because they have three children together, now see what she has done to him ” a neighbour who craved anonymity whispered to Vanguard.

Confirming the incident, a police source at the Sapele Police Station said the wife has been arrested “Yes, we arrested the woman last night and we have commenced investigation into the matter. We will charge her accordingly,’’ he said.