LAGOS: HOW WE GANG-RAPED OUR 15-YEAR-OLD CLASSMATE – Confession of three JSS1 students 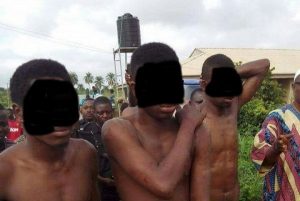 HOW WE GANG-RAPED OUR 15-YEAR-OLD CLASSMATE

They were arraigned at a Tinubu Chief Magistrates’ Court,  which doubles as a Family Court.

They are facing a four-count charge of conspiracy, unlawful carnal knowledge, sexual assault and defilement.

She said the boys gang-raped their 15-year-old classmate at her home.

“The boys claimed that they came to visit their classmate at her house while her parents were not around.

“They offered her a drink, which was suspected to contain sleeping pills and that was the last the girl remembered when she became conscious.

“When she regained consciousness, she discovered that she was naked and bleeding, while the boys had disappeared.

“She raised the alarm, which led to the arrest of the accused.

“The girl has been traumatised and hospitalised as a result of the incident,” Ajibode said.

The case continues on January 16.

@CitizenOsun
Previous ONDO: HOW CAC PASTOR TRICKED ME WITH 50,000, TOOK ME FROM MY BOYFRIEND, IMPREGNATED ME AND ABANDONED ME
Next OSUN: COURT REMANDS TWO CHIEFS, ONE OTHER IN PRISON FOR SETTING PALACE ABLAZE