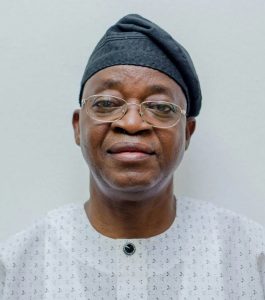 GOVERNORSHIP aspirant of the All Progressive Congress (APC) for the September 22nd gubernatorial election in Osun State, Alhaji Adegboyega Oyetola has promised that he will run a transparent and accountable government if given the opportunity to succeed Governor Rauf Aregbesola.

He said this at his campaign office in Osogbo, the state capital shortly after declaring his intention to contest for the post of the Governor.

Oyetola who is the current Chief of Staff to the Governor in the state said he would work with well-meaning bureaucrats in the state to urgently increase the Internally Generated Revenue (IGR) base of the state and block all leakages and waste of the Osun commonwealth.

According to him, “While working even harder to improve our IGR, we will specifically continue to cut leakages in tax collection and tax administration processes in the state. Consequently, we will run a transparent and accountable government, steeped in single-minded pursuit of reducing dependence on federal allocation as a means of funding government.”

Quoting the National Bureau of Statistics (NBS) statistics which indicated that Osun has the lowest unemployment rate in the country, Oyetola commended Aregbesola’s administration for the feats achieved in its seven and a half years.

Oyetola said getting the teeming youth in the state meaningfully engaged remains a pressing challenge. He lamented that the unemployment situation in the country has assumed crisis proportions. He promised to improve on the existing youth programmes.

“I am ready to accept the responsibility of managing the lives and future of Osun youths. To do this, economic opportunities driven by a high growth rate must be higher than expected increase in population. To make a perpetual dent on poverty, our State needs to have seven per cent sustained economic growth over several years. How to achieve that is my vision and job.”

“Let it be known that I am also a product of a humble background. I have seen poverty and I have had a bit of romance with it. I am often faced with the picture of people, particularly youth who radiate no hope for a better tomorrow. Their memories make me bleed in my heart but also make to be more determined to get involved and effect the needed change in politics.”

Oyetola promised to work with traditional rulers, elders, civil servants, farmers, market women, artisans, students and other critical sectors to develop an all-inclusive developmental plan for the short, medium and long-term for the state.

“This plans will reflect the yearnings of our people across the three senatorial districts of the state, align with our party’s cardinal programmes and it will further put our state on a strong socio-economic footing”, Oyetola said.

@CitizenOsun
Previous IBADAN: My husband planted `magun’ on me, wife tells court
Next ONDO STATE: Man, 27, in court over attempt to rape 60-year-old