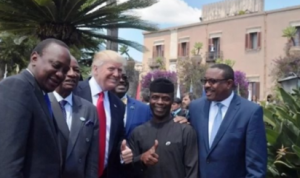 Osinbajo meets US President Trump The G7 is comprised of Canada, France, Germany, Italy, Japan, the UK and the U.S. He also met other leaders, including the Chancellor of Germany, Angela Merkel. The special assistant to the acting president, Mr. Laolu Akande, said Osinbajo was invited to the summit to represent Nigeria. The 43rd Group of Seven (G7) Summit in Italy will focus attention on opportunities and challenges in Africa and the implications for the international community. Four other African leaders joined the World leaders.

They are Uhuru Kenyatta of Kenya, Beji Essebsi of Tunisia, Mahamadou Issoufou of Niger and Prime Minister Hailemariam Desalegn of Ethiopia. UN Secretary-General António Guterres, in his address at the Summit, called on world leaders to invest in technology, education and capacity building of youths in Africa. He spoke on ‘Reinforcing the Partnership between the G7 and Africa’.

The Secretary-General noted that the international community had a role to play in helping the continent adapt as it heads for a new wave of industrialisation.

“Failing to do so might have dramatic consequences on the well-being of the people of Africa; increase fragility, causing massive displacement and risking to boost unemployment, especially for young people,” Guterres said. He said at the two-day meeting in Taormina, Italy, that a majority of African countries have improved their competitiveness and business environments. “Our shared challenge is to build on these gains and to change the narrative about Africa – from crisis-based narrative to an opportunities-based narrative.

“We know that the full and true story of Africa is that of a continent with enormous potential for success. “Africa has the fastest growing youth population in the world, which must be supported with education and training in tomorrow’s jobs,’’ he said. He said that high levels of youth unemployment is not only a tragedy for young people themselves, but can also undermine development and generate frustration and alienation. “That, in turn, can become a threat to global peace and security,” Guterres cautioned in his statements.

According to him, investment in youth should include education and training for girls and women. “Gender inequality is costing sub-Saharan Africa 95 billion dollars a year, which is at six per cent of the region’s gross domestic product – a needless loss of inclusive human development and economic growth,” the UN chief said.

He also called for moving manufacturing and traditional activities, such as agriculture, higher up the global value chain, as well as investing in infrastructure that links regions, countries and communities. “Smart digital platforms, smart grids, smart logistics infrastructure can link urban and rural, and better connect the people of Africa to each other and the world,”.

Guterres stated. He added that more than just the transfer of technology, the continent needs to maximize the power of innovation for the people of Africa. According to him, such support and innovation will help to achieve the Sustainable Development Goals and Africa’s framework for socio-economic transformation, known as Agenda 2063. (NAN)