Bisi Ibidapo-Obe: The Controversy, The Pain, The Fame

For lovers of the Nigeria entertainment industry especially the movie sector popularly referred to as Nollywood, the name Bisi Ibidapo-Obe is a familiar one,no doubt.
The beautiful Thespian, a native of Ilesa, who is said to have started out as an hair dresser in Lagos before venturing into acting has featured in scores of movies and has also personally produced some.
Her acting skills has endeared her to her numerous fans all over the world thereby making her a toast of so many of them. 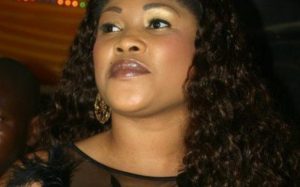 As famous as Bisi is through her work however, alot of controversies continue to trail her till date thereby causing her alot of pain.
A good example is the case of her controversial pregnancy and eventually having a daughter for Senator Dino Melaye.
Although, the joy of having a child for the first time can never be imagined until experienced, but for her, the expectation of joining the league of mothers left a sour taste in her mouth.

As the story was reported then, the media was awashed with the tales of Bisi’s pregnancy for Dino. No sooner had the news dropped in the media than the lawmaker denied the paternity of the unborn child but the actress insisted that the he was responsible for the pregnancy.

The development took a messy dimension then, as Bisi, who was said to be engaged to another man, who is a staff of NNPC, as at that time, has courted more controversy as the revelation has left her current fiancee devastated thereby sending her packing from the Magodo apartment he rented for her and dispossessing her of the Range Rover Sports he bought for her. The parents of Bisi’s fiancee had insisted that the actress must get pregnant before they can get married but Bisi got pregnant for a different man!

Bisi who is one of the big girls of Yoruba Nollywood in an interview had admitted that her relationship with Melaye was very brief and they had not planned to have a baby but fate and circumstances proved her wrong. She insisted she would not abort the pregnancy as allegedly demanded by Melaye because she had waited long enough to have her own baby.

Even though the pregnancy is a cheering news to the star actress and her league of friends, some entertainment buffs blamed her for the controversy surrounding the pregnancy. Many have therefore accused her of infidelity although she was not officially married at that time. She eventually gave birth to a beautiful girl who she named Destiny.

Bisi who will turn 40 years old in February 2017 was once linked to popular Fuji musician, Wasiu Ayinde Marshall (K 1). According to tale bearers, Bisi had moved into K 1’s Castle of Peace at Ago, Okota, Lagos where K1 was residing as at then, with the hope of settling down with him, but was sent packing due to what close aides of the Fuji star described as her unacceptable lifestyle. It was learnt that the Fuji musician was really keen on marrying her but backed out eventually.

Bisi’ has also been romantically linked to Senator Musiliu Obanikoro who allegedly bankrolled one of her films. Its still believed in some quarters that they are still good friends.
Then, a London-based big boy, Kunle Ashimi popularly known as ‘Pepper who was so captivated by Bisi’s beauty such that he bought her a Honda Element which she used in cruising town while their love affair lasted. But the London big boy who has many assets and greatly respected in the Queen’s land backed out of the relationship suddenly.

Bisi who loves to enjoy life to the fullest teamed up romantically with another fuji musician, Wasiu Alabi Pasuma but the relationship packed up.

Reports have it that there was a time she was said to be heading to the altar with an undisclosed lover, only for the story to change later. At another time she was linked to one of Nigeria‘s top musicians, Michael Stephens popularly called Ruggedman.

There was also a time she had a crisis with Timaya when she tongue-lashed the Bayelsa-born musician for daring to woo her. Interestingly, Timaya claimed she was the one making the move.

It was also reported that the delectable actress once had a relationship with her colleague in the industry, Chidi Mokeme years back.
As uncomplimentary as all these reports are however, one thing is certain, Bisi, who can be said to have paid her dues in the industry, still stands tall in the league of her colleagues. Her beauty and class puts her in a world of her own among her peers.