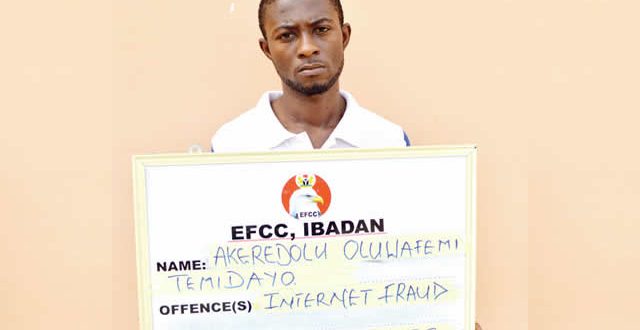 Akeredolu (aka Susan Henderson) was being prosecuted by the Ibadan zonal office of the Economic and Financial Crimes Commission on a three-count charge bordering on obtaining money under false pretences, possession of fraudulent documents and forgery.

The offence, according to the charge sheet, contravened sections 1, 2 and 6 of the Advance Fee Fraud and other Fraud Related Offences Act, 2006, as well as Section 1 (2) (c) of the Miscellaneous Offences Act, Cap. M17, Laws of the Federation, 2004.

The commission alleged that the accused had been posing online as a woman under the name Susan Henderson through which he fraudulently obtained gift cards worth $300 from one Ross Kirkley.

It further stated that investigations carried out after his arrest revealed that the accused had obtained sundry amounts estimated at $600 from other unsuspecting victims using the same gimmick.

However, when the charges were read to Akeredolu, he pleaded not guilty.

The EFCC’s counsel, Mabas Mabur, asked the court for a trial date and an order to remand the accused in prison custody.

Akeredolu’s counsel, Toyese Owoade, however, moved an oral application, praying the court to admit the defendant to bail or be returned to the EFCC custody if the bail application would not be granted.

Mabur, however, opposed both prayers by the counsel, arguing that since the defendant was already before the court, it was only appropriate that he was remanded in prison custody.

The presiding judge adjourned the case to May 17 for trial and presentation of formal bail application for consideration and ordered that Akeredolu be remanded in prison custody.