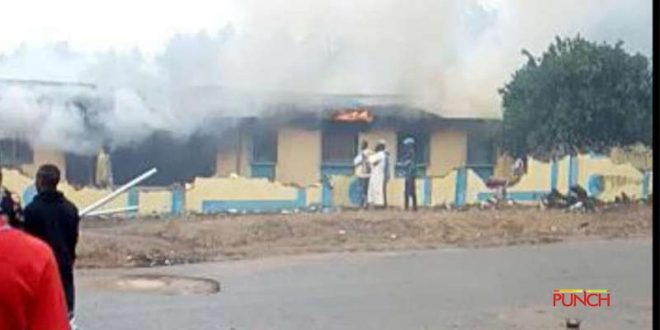 The Police in Osun on Thursday arraigned 28 persons before an Osogbo Chief Magistrates’ Court over their alleged involvement in burning down a police station in Iwo, Osun state.

The Prosecutor, Insp Mustapha Tajudeen, told the court that the accused persons allegedly committed the offences on August 24 at 10:30pm, at Iwo.

Tajudeen said the accused conspired among themselves to set ablaze a Police Area Command office and its quarters which led to unlawful damage of Police Patrol Vehicles with Reg. No NPF 446D, NPF38C, SAS05, NPF 7619 and other items.

He alleged that the accused persons also damaged two AK47 rifles and one riot gun as well as an SUV Jeep with registration number GGC 281 GE Valued N3.4 million.

The prosecutor said the suspects also assaulted one Sgt Ogundipe Kolawole, inflicted injuries on him and also stole some electronic gadgets which were valued at one million Naira.

Tajudeen said a pair of police camouflage, three pairs of police uniform, one shirt, jeans, and a cash sum of N23,000 were carted away by the defendants.

After the charges were read to them, they pleaded not guilty to the 17 counts bordering on conspiracy, assault, breach of peace, unlawful damages, theft, and threat to life.
The Defence Counsel, Mr Taofeeq Telowogbade, prayed the court to admit his clients’ bail on the most liberal terms.

The Magistrate, Mrs Falilat Sodamade, granted the prayers of the defence counsel and admitted them to bail in the sum of N500,000 each with one surety each in the like sum.

Sodamade ordered that the sureties must reside within the court’s jurisdiction and show evidence of two years tax payment to Osun government.

She also ordered that the sureties must submit three passports photographs to the court registrar and provide affidavits of means.

The magistrate adjourned until October 8 for mention.

@CitizenOsun
Previous OGUNSUA OF MODAKEKE; OBA FRANCIS OLATUNJI ADEDOYIN JOINS HIS ANCESTORS AT 96… .. 7-day mourning declared in his honour
Next LAGOS: MAN, 34, REMANDED IN PRISON OVER RAPE OF 13-YEAR-OLD GIRL