Breaking News
Home / News / HOW 25-YR-OLD MOTHER OF TWO; KEHINDE OLOMOLA WAS HACKED TO DEATH IN EKITI …WE’VE ARRESTED 3 IN CONNECTION TO THE ACT ― POLICE 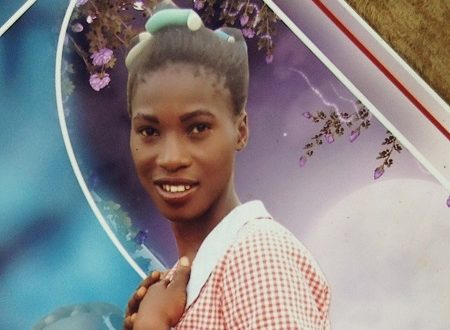 HOW 25-YR-OLD MOTHER OF TWO; KEHINDE OLOMOLA WAS HACKED TO DEATH IN EKITI …WE’VE ARRESTED 3 IN CONNECTION TO THE ACT ― POLICE

A 25-year-old mother of two, Miss Kehinde Olomola, has died from injuries she sustained when she was attacked in her home at Igede community in Irepodun/Ifelodun Local Government Area of Ekiti.
Her twin sister Taiwo, brother, Tosin, mother, Mrs Dupe told newsmen, on Thursday, that the late Kehinde did not survive a stab she received in her neck, and that she died at the Federal Teaching Hospital (FETHI), Ido-Ekiti, on Monday.
Taiwo claimed that when she called her twin sister on the telephone, at about 9 pm on Sunday, “I heard a male voice in the background and I  angrily ended the call after inquiring about the male voice.”
She said: “The male voice was strange to me, I got angry and I said ‘what is a man doing in your room at such a late hour’. I didn’t wait for an answer as I ended the call. That was the last I heard from her until we learnt the following morning that she had been stabbed in the neck.”
Speaking on the death, their family friend, Daniel Oluwadare, said he received a phone call from the elder brother of the deceased, Tosin Olomola, that she had been injured and that he saw her in a pool of her blood.
Oluwadare said he saw the fatally stabbed Kehinde barely breathing and explained that neighbours helped in getting her to the General Hospital, Iyin-Ekiti where she received first aid before she was moved to FETHI.
According to him, “the doctors at FETHI did very well to bring her back to life, and although she could not be heard as she made efforts to respond when asked questions, she was able to say that she was attacked by one Odunayo, but we could not decipher the other name she was mentioning.”
Oluwadare said the doctors announced Kehinde’s death to them on Monday “after we thought that she had made it through.”
On what they thought might have led to her being attacked and by whom, Taiwo stated that she was not aware of anyone her sister had issues with, pointing out that she was “a lively person who plays with people and an easy-going person that wouldn’t be found in places of trouble.”
She said a suspect had been arrested by the police and insisted that “the police must help us get to the root of this painful murder; they must take appropriate steps and ensure that whatever the laws prescribe for a murderer must be applied.”
Confirming the incident, the Public Relations Officer of the Ekiti State police command, Mr Caleb Ikechukwu, said the incident was reported shortly after the act was committed “and the police swung into action.”
Ikechukwu said “police officers were deployed to the scene, where they saw a pool of blood and blood on her phone and an axe that was used to commit the crime. Although the lady was rushed to the hospital where she later died.”
DSP Ikechukwu added that “before the lady died, she made a dying declaration of who attempted to stab her. She mentioned some name and the police took note of those names and effected an arrest.”
He said about three persons were arrested regarding the crime and added that the case is still under investigation and as soon as the investigation is concluded, whoever is found culpable will be charged to court and will face a murder charge.”
@ Nigerian Tribune
Ekiti state police command 2018-08-31
Dotun Olanibi
Share

@CitizenOsun
Previous PASTOR PARADED FOR SEXUALLY ASSAULTING 17-YEAR-OLD MAID
Next SHE’S ADULTEROUS, GOT OUR FOUR-YEAR-OLD SON ADDICTED TO ALCOHOL —Husband … HE’S A DRUNK, BEAT ME TO A PULP AFTER BEING DUPED —WIFE