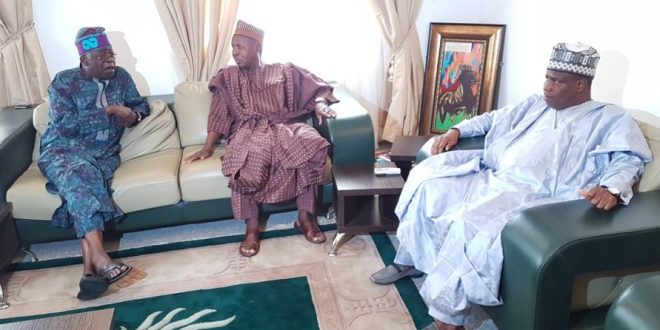 BEREAVED national leader of the All Progressives Congress (APC), Senator Bola Tinubu, on Thursday, flew out of the country.

This was as sympathisers besieged his his house over the death of his son, Jide, while more condolences poured in from eminent Nigerians, both home and abroad.

Among those who were at the Lagos home of the former governor were his political associates, businessmen and women, religious leaders, neighbours, friends, family, among others.

Among those who visited were the chieftain of Afenifere, Chief Ayo Adebanjo, who described the demise of Jide as a big loss, urged Tinubu to take heart.

“This is a serious matter; a lot of hope has been dashed. It is not an easy thing. Only God can console the family,” he said.

The Chief Judge of Lagos State, Justice Opeyemi Oke, said in the condolence register that “it is with a great shock I received the news.”

Other sympathisers were Elder Tayo Soyode, Mr Femi Falana, delegates from Ondo State government, led by Mr Ifedayo Abogunde, the Secretary to the State Government, among others.

Reacting to the death of Jide, former Senate President, Senator David Mark, in a condolence message made available by his media assistant, Paul Mumeh, condoled with the family  and prayed that God would replenish the souls of the departed.

“I identify with you at this moment of grief. I earnestly share in this pain and prayed that God comfort you

Kwara State governor, Dr Abdulfatah Ahmed, in a statement by his Chief Press Secretary, Abdulwahab Oba, said the sudden death had denied the country the service of a promising and resourceful legal practitioner.

The governor, therefore, urged the national leader to take solace in the fact that death is an inevitable end of all mortals.

Minister of Mines and Steel Development, Dr Kayode Fayemi, in a statement Wednesday evening, expressed shock over the death of Jide Tinubu, describing the development as sad and disheartening.

He urged the APC leader and the entire family to remain strong during the trying time, while praying that God to heal the wound.

Former governor of Oyo State and chieftain of APC, Chief Adebayo Alao-Akala, while commiserating with the people of Lagos State, the immediate and extended Tinubu family, said the loss of Jide was painful.

He urged the APC national leader and the family to take solace in God, bearing in mind that death was inevitable.

Chairman, Senate Committee on ICT and Cybercrime, Senator Abdulfatai Buhari, in a condolence message, said the death of Jide was shocking and devastating but, however, said “God knows better.”

According to him, “no amount of words can heal the wound but we can only pray to God to comfort and console Senator Tinubu and his wife, Oluremi and other family members.”

Legal icon, Chief Adeniyi Akintola, in a statement made available to newsmen, described  Babajide’s death as “painful and unexpected.”

He pleaded with Nigerians to continue to pray for the Tinubu family, while advising the national leader of APC to take solace in the fact that “God giveth and God taketh.”

The Peoples Democratic Party (PDP) described the death of  Jide as “sad, shocking and very painful.”

Mr Dayo Adeyeye, the national publicity secretary of the party, in a condolence message on Thursday, said “we believe that the Almighty God knows the best and understands the

circumstances surrounding his sudden departure from us.

“We pray God to give his family and the government of Lagos State the fortitude to bear this irreparable loss.”

THE All Progressives Congress (APC) in Oyo State described the news as devastating.

In a statement issued in Ibadan on Thursday and signed by its state chairman, Chief Akin Oke, the Oyo APC expressed shock and regret over the development and called for prayers for the former Lagos State governor and his family.

“We share in the grief of our leader, Senator Bola Tinubu and his entire family at this moment and we pray God Almighty for the fortitude to bear the irreparable loss,” the party stated.

Pan-Yoruba sociopolitical group, Afenifere, in a condolence message made available to newsmen in Lagos by its national publicity secretary, Mr Yinka Odumakin, told Tinubu that “we share in your grief.”

The group, while praying that the soul of late Jide would find rest in the bossom of the Lord, “urged the Tinubu family as believers to submit to the will of God who gives and takes life.”

The Advanced Peoples Democratic Alliance (APDA), on Thursday, commiserated with Tinubu, over the sudden demise of his son.

“We are saddened as a party to hear the news of this great loss to the family and Nigerian youths in general,” it stated.

In a statement issued and signed by its national publicity secretary, Mr Tosin Adeyanju, a copy of which was made available to the Nigerian Tribune in Abuja, APDA said its consolation was that the deceased lived a fulfilled life in his short journey on earth.