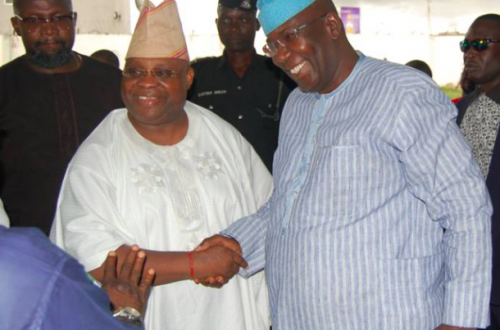 In a major setback for the ruling All Progressives Congress in Osun State, Peoples Democratic Party won the Osun West senatorial bye-election held yesterday by the Independent National Electoral Commission. In the final result announced by INEC in the early hours of today, the PDP candidate, Otunba Ademola Adeleke, the younger brother of the late Senator Isiaka Adeleke for whose replacement the election was held, won with 97, 480 votes. He beat the APC candidate, Senator Mudashir Hussein, who scored 66,116 votes to place second.

PDP had posted wins in many of the early results announced at the polling units across the 10 local government areas of Osun West senatorial district.

The U-turn in the senatorial district, which was hitherto dominated by APC under Senator Adeleke, was widely seen as a protest against the party for failing to nominate the aspirant from the Adeleke family, who was deemed a perfect choice to continue on the seat of his late brother. The majority of the people, THISDAY learnt, wanted some kind of compensation for the family for the good works of the APC senator for Osun West, whose death on April 23 at the age of 62 had shaken the area to its foundation, leading to protests and tension.

APC’s unwillingness to field Ademola Adeleke had caused him to defect to PDP soon after the death of his brother. He then emerged PDP’s senatorial candidate few weeks to the bye-election.

The defeat of Hussein, who was the choice candidate of Osun State Governor Rauf Aregbesola, was also seen as a verdict against the APC administration in the state. Aregbesola’s tenure has been marred by economic tensions occasioned by his government’s inability to pay workers’ salaries and meet other financial obligations, resulting in several months of unpaid remunerations. There has also been rising religious tension owing to government-instigated rivalry between Moslems and Christians, who had previously lived cordially.

The bye-election was largely peaceful. But the Osun State Police Command said it arrested some hoodlums who were trying to cause commotion at Igbokiti Unit, Ward 10, Okinni, Egbedore local government council.

THISDAY was informed that the thugs invaded the polling unit with dangerous weapons and attacked voters and some ad hoc electoral officers. Voters waiting to cast their votes were allegedly attacked with machetes, causing them to run for their lives and prompting many others to stay away from the polling booths to avoid being caught up in the violence.

However, the police were able to arrest three of the suspected political thugs.

The Commissioner of Police, Mr Fimihan Adeoye, confirmed the incident. Adeoye said, “it is true we arrested three suspected thugs in Egbedore and their case is currently under investigation.”

He added, “With our vigilance and commitment to ensure peaceful conduct of the exercise, we are very happy that there is peace and there is no significant case. We will sustain the peace and effective security till the end and even after the entire electoral process.”

The police commissioner reiterated, “We would not hesitate to deal with anybody who may want to distort the process of election, irrespective of status, religious or political group.”