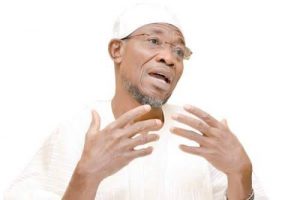 Our correspondent, who went round the state during the week, discovered  that  many government-owned sports facilities in the state had been abandoned, leaving the state athletes without conducive  training  venues.

Osun athletes have missed   a number of national competitions as the sports council could not sponsor them.

The Osogbo Stadium, which is the only functional stadium in the state, is  used by the state-owned football clubs Osun United and Osun Babes.

One of the athletes, who identified himself as Olu, said many top athletes had fled Osun, with others planning to leave for other states due to the poor conditions in which athletes train and compete in the state.

He said, “We have just finished our training on the road here. This is not good because there is no competition where athletes run on concrete.

“Apart from that, the interlocking stones make us vulnerable to injuries. We don’t have spike shoes. We buy second-hand kits, which we can afford and our allowances is N12, 000 per month.”

Another athlete said some of them had been forced to do menial jobs to eke out a living.

“I thank God that I have an Okada, which I ride to make money after training. If I don’t do that I may die of hunger. There are athletes in other sports, who also ride Okada and some of them work as labourers to sustain themselves.”

The athletes also said the last competition they attended was the 2012 National Sports Festival  in Lagos.

A coach, who told our correspondent that he is  being  paid  N15,000 per month, said he washes clothes for  people  to keep body and soul together.

Another official, who spoke on condition of anonymity, said, “We have a lot of talents in Osun but we lack facilities and equipment to give them the best training. That is why some of them seek greener pastures in other states which they  now represent.

“There is no state, you will get to and you won’t find athletes from Osun. They represent those states because they are getting encouragement and you can’t blame them for that. But some athletes are staying just because they are loyal to their coaches.”

The General Manager, Osun State Sports Council, Mrs. Lola Oluokun, was not at the stadium when our correspondent visited her office. Oluokun was said to be out on an official assignment.

However, spokesman for the sports council, Mrs. Funmilayo Moradeyo, said the state government was doing its best. She said the economic problems facing the nation was the cause of the challenges affecting sports in the state, adding that this was not limited to the sports sector only.

Moradeyo said, “Some of what you were told were exaggerated. But I can tell you that the state government is trying its best in sports just like it is doing in other sectors. There is a shortage of funds  and this is a known fact to everybody. The economy is not in a good shape that is the reason for it.

“The state government cannot bear the burden alone. There are many areas where funds are needed urgently and the money is no longer coming like it used to before the recession.”

However, despite the challenges facing the sports sector, one good step the state government has taken is that there is at least one standard football pitch, volleyball court, handball court and basketball court in each of the new secondary schools being built across the state.