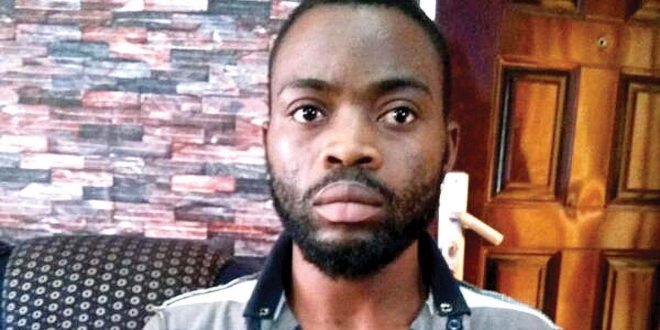 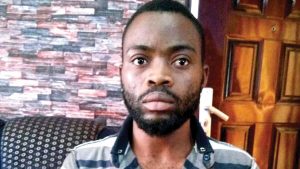 A suspected Internet fraudster, Abiodun Joseph, who impersonated the Ooni of Ife, Oba Adeyeye Ogunwusi, on Facebook and duped two Nigerian ladies of various sums of money, has been arrested by the Ogun State Police Command.

The bearded suspect was said to have been arrested on Wednesday, April 19, 2017, at Ilese, in the Ijebu North East Local Government Area.

Joseph was paraded alongside three armed robbers and kidnappers at the state command headquarters, Eleweran, Abeokuta, on Monday.

The suspect had allegedly duped the ladies, who were based in the United States of America, to the tune of N600,000, which was paid through money transfer.

While parading the suspects, the state Commissioner of Police, Ahmed Iliyasu, said Joseph had been using his Facebook and Whatsapp accounts to dupe unsuspecting members of the public.

He said his men got wind of the illicit act of the 26-year-old suspect and swung into action.

He said, “On interrogation, he owned up to the crime and confessed that he defrauded the ladies of N600,000.”

While speaking with PUNCH Metro, Joseph said he opened the Facebook account in October 2016 to defraud people.

He said he uploaded Ooni’s pictures from the Internet and used them on the Facebook account, adding that in no time, ladies began to send him requests, commenting on his good looks.

Joseph revealed that many ladies sent requests to him that they wanted to be his oloris (wives) thinking he was genuine, adding that he exploited their desperation to defraud some of them.

He said, “I opened the Facebook account in October last year purposely for Internet scam. I knew that Ooni was popular and that was why I uploaded his picture.

“A few days after I opened the Facebook account, many people, mostly ladies, sent friend requests. Many of them said I had good looks and they wanted to be my oloris.

“In our chats, I told them that they have to pay some money for traditional ritual if they are really interested in being the oloris. Two of them in the US fell for the scam and sent some money to me totalling N600,000 through money transfer.

“Some of the ladies were really desperate; some of them sent nude pictures, showing their breasts and private parts (as seen by our reporter from one of the two iPhone 6 seized from the suspect).”

Joseph, however, said one of the ladies who wanted to be oloris demanded that he should buy her a house worth N45m.

The suspect said he told her that she had to pay N5m out of the amount and he would make up the balance.

He said he was still waiting for the N5m when the police swooped on his residence and arrested him.

“I regret my action, most especially using the name and pictures of the Ooni to perpetuate fraud. I seek his forgiveness,” he said.

He also said a member of an eight-man robbery/kidnapping gang, who allegedly attacked a quarry in Ijebu Ode to kidnap Chinese expatriates, was fatally wounded during the exchange of fire between the gang and the police.

Iliyasu said a manhunt for other fleeing members of the gang was on.