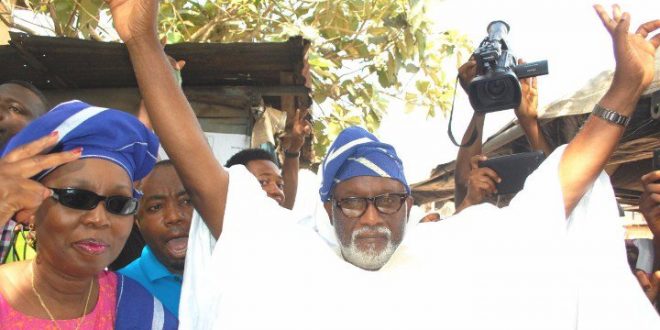 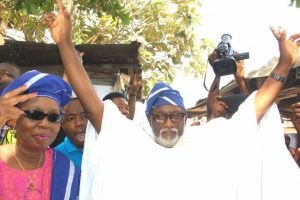 AKEREDOLU JOINS HIS NEIGHBOURS AREGBESOLA AND OBASEKI IN THE PROGRESSIVE FOLD

WITH the victory of Ondo State Governor-elect, Mr Rotimi Akeredolu, SAN, in last Saturday’s election, power will return to the Owo axis of the state when Governor Olusegun Mimiko, quits in February 2017. The last time an Owo person governed the state was in 1983 during the era of late Second Republic and first civilian governor of Ondo, Chief Michael Adekunle.

The Independent National Electoral Commission, INEC, yesterday, declared Akeredolu, who ran on the platform of the All Progressives Congress, APC, as the winner of the Ondo State governorship poll. He polled  244,842 votes to beat his closest marker, Mr Eyitayo Jegede of the Peoples Democratic Party, PDP, who got 150,380 votes. He emerged victorious with  a margin of 94,462 votes and won in 14 of 18 local councils. Rotimi Akeredolu and his wife Betty jubilating at his residence in Owo after the declaration of the result by INEC.

Jegede won in two local councils. Alliance for Democracy, AD candidate, Chief Olusola Oke, garnered 126,889 votes and won in two local councils, according to the final results announced by  the Vice Chancellor of University of Ilorin, Professor Abdulganiyu Ambali, the returning officer. Dr Olu Agunloye of the Social Democratic Party SDP polled 10,149 votes to come fourth without winning any of the 18 council areas of the state.

When Akeredolu ascends to power in February, it will be coming 13 years after  Ondo North held power through late  Chief Adebayo Adefarati.

The council areas won by Akeredolu include the two strongholds of Jegede –  Akure South and. Akure North and Ifedore, the council area of the state chairman of the PDP, Clement Faboyede. Akeredolu won massively in Owo, where he hails from with over 32000 votes. Other councils won by the governor-elect include Idanre,  lrele, Akoko North East, Ile Oluji-Okeigbo, Akoko South-East, Ose, Akoko South-West, Akoko North-West, Odigbo and Ese-Odo.

Jegede who was betrayed by his people in both Akure North and Akure South managed to win in the two councils controlled by the outgoing governor, Dr Olusegun Mimiko – Ondo East and Ondo West council areas. Olusola Oke also managed to win in Okitipupa and won massively in his homet own of  Ilaje local council.

@CitizenOsun
Previous STAY AWAY FROM MIMIKO IF YOU WANT TO SUCCEED Jimoh Ibrahim Tells Akeredolu
Next Who Will Rescue Osun PDP… As Omisore Romances APC.