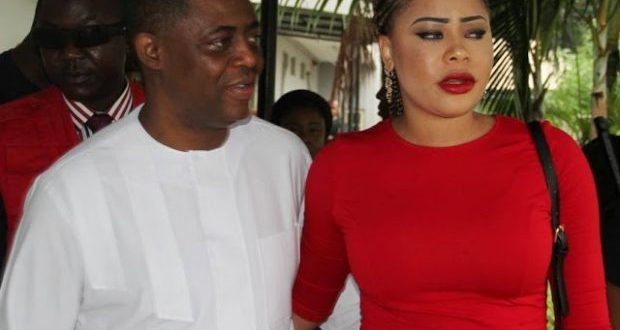 Precious, who was a guest of Governor Ayodele Fayose, had gone to a branch of Access Bank in Ado Ekiti around 3pm when she was detained by officials of the bank.

Sensing that she was not being promptly attended to, she inquired from officials what the problem was and was told she was being detained on the instructions of the EFCC.

Precious, who had her eight-month-old baby with her at the time, was prevented from leaving the banking hall thereafter.

It took the intervention of Fayose, who led scores of supporters to the bank around 7pm to secure her release.

Speaking with our correspondent after the incident, Mrs. Fani-Kayode lamented that she was badly treated by the officials while her baby was denied food.

She stated, “I’m not a politician and that account had been dormant for about five years. I only activated it last month in Port Harcourt.

“I decided to go to Access Bank to make some withdrawals when I was detained on the instructions of the EFCC.

“They told me the account had been frozen and they were asked by the EFCC to arrest me on the spot.

“I have been operating the account since 2005 when I was a student in the university. They had earlier frozen my two bank accounts which they have not opened till today and I have been waiting for them to invite me, but up till today, they have not.

“The balance in the account is just N200,000; so, I don’t know what their interest is. I’m a private person. I have not received any political fund; so, why are they trying to starve my family?

“That account has nothing to do with politics. This is dehumanising. I had to call the governor to inform him of the development.”

Condemning the action of the EFCC and the attitude of the bank officials, Fayose warned the anti-graft agency against becoming lawless and reckless against Nigerians.

He asked the commission to prepare for a stiff resistance if it did not stop “persecuting” him and his friends.

Fayose added, “They can’t try that nonsense in my state. If they try it, there will be a showdown. They are over-stepping their boundary. This is a country that operates a constitution. What kind of molestation is this, taking away the rights of Nigerians because you are investigating?

“Must they terrorise people because they are in opposition? I have demanded an apology from the bank. If it fails to do that, I’m done with them. This is lawlessness.”

In a telephone interview with our correspondent, Femi Fani-Kayode, a chieftain of the Peoples Democratic Party, urged the government to leave his family members alone and face him.

Fani-Kayode stated, “This government is sick and cowardly and so is the EFCC. If you have a problem with me, face me and leave my family alone.

“My wife travelled to Ado Ekiti to see my friend and brother, Governor Fayose, and his family. They were on their way out of town when they went to Access Bank in Ado Ekiti to get some money.

“They were illegally detained, brutalised and put under arrest on the orders of the EFCC at a bank in Ado Ekiti today.

“She has never had any business with me; she has never been formally invited by the EFCC or asked any questions about her transactions and neither has it written to her on any issue even though it is always sending letters to my house and sending people there.

“If Buhari wants to deal with me, why doesn’t he face me like a man instead of trying to harm and hurt my eight-month-old son and wife.

“Had it not been for the intervention of Governor Ayo Fayose, they would have taken them away and subjected them to all manner of harm and indignity simply because she is married to me.

“This is Buhari’s Nigeria and we will resist his wickedness and tyranny.”

Fani-Kayode said he intended to sue the bank and the EFCC for this “illegal and wicked action.”

He added, “They have no right to do this. If they want to see my wife, all they need to do is to invite her. We have nothing to fear. They do not need to be so primitive and barbaric to people.

“In an attempt to starve and harass me and my family, all my accounts and wife’s accounts have been frozen.

“Now, they are resorting to arresting people’s wives and children for no just cause.”

In its reaction, the EFCC denied detaining Fani-Kayode’s wife and the son.

In a statement by the commission’s spokesman, Mr. Wilson Uwujaren, on Monday night, the anti-graft agency said the ex-minister’s wife attempted to withdraw money from an account which the agency had frozen.

The statement read in part, “Contrary to the spin about the purported arrest of mother and child, a certain Chikwendu Sonia today attempted to withdraw money from an Access Bank account that had been placed on ‘Post No Debit’ Category, following the discovery of illicit cash flows into the account.

“She was intercepted by the bank while the commission was notified, but because it was late, the EFCC advised that the suspect be taken to the police station for processing and release on bail.

“They were arranging to take the suspect to the police station when Governor Ayo Fayose stormed the bank with thugs and his personal security and forcefully secured the release of the suspect, with claims that the EFCC had no power to detain anybody in his state. He also vowed to close down the branch of the bank.

“The said account, which had a balance of N2,307,712.82, was flagged following investigation into the PDP Joint Trust Fund when the commission traced N1.1bn to the Zenith Bank account of Fani-Kayode.

“It was discovered that the account had two biometric identification numbers, one for Fani-Kayode and the other (with BVN 2205597283) for Sonia Chikwendu. The same BVN is linked to two other accounts in Diamond Bank and 15 accounts in Guaranty Trust Bank.”

@CitizenOsun
Previous The Unaired Part of Mrs Buhari’s Interview
Next AFTER IGI ARUWE, I FELT SO DEPRESSED THAT I ALMOST QUIT – Biyi Samuel “Igi A Ruwe”