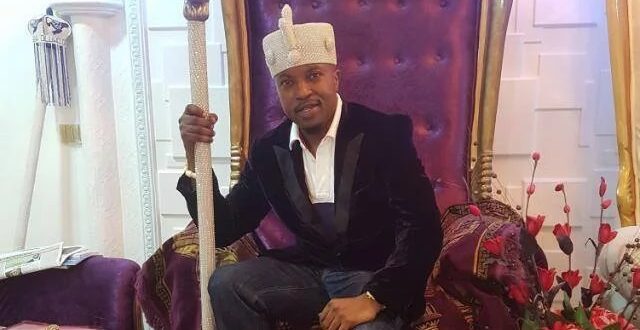 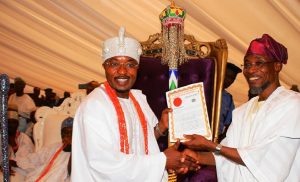 The Imperial ruler of Iwo kingdom, Oluwo of Iwo, Oba Rasheed Adewale Akanbi, means different things to different people; to some, he is that “youthful” king who young blood still flows in his veins thereby making him, despite being a king, display the kind of exuberance only associated with youths. Some see him as the “millennium” king whose leadership style is attractive to all classes of people especially the youngsters.
Recently however, he was heavily criticized for wearing a suit on his throne. According to reports, the Oba is under heavy criticism because he is not ‘upholding his culture’ by sitting on the throne in clothes other than his royal robes. Oba Rasheed who is married to a Jamaican woman and has lived abroad for over 20 years, was crowned the Oluwo of Iwo kingdom a year ago. He is the 16th Oluwo of Iwo kingdom.
As if that was not enough, he got another strong cricism this time around from the Christian fold for calling out pastors saying they are not representatives of God! He was quick to deny the allegation by saying that although he presides over a predominantly Islamic community, he has no problem with Christians as BOWEN UNIVERSITY, one of the leading universities in Nigeria which is owned by the Baptist church is situated in Iwo.
The last is not heard about the flamboyant monarch as he “pulled another stunt” by leading the eid prayer recently, an act which was greeted with serious debate home and abroad.
The king however defended himself in this interview he granted a Nigerian based daily newspaper.

Why I took over, led Eid prayer with my crown on —Oluwo
The Oluwo of Iwo, Oba Abdul Rasheed Akanbi (Telu i) shocked the congregation at the Iwo Central Prayer Ground on Eid-el Fitri Day, led the two-rakah naflat marking the end of Ramadan. In this interview by TUNDE BUSARI, Oba Akanbi explains why took over from the Chief Imam and he led the ceremonial prayer, among other issues. Excerpts.

Do you have the requisite qualification to lead prayer as you did at the prayer ground on Wednesday?
What do you mean by requisite qualification? How much of Iwo history do you know? You need to seek knowledge first to be liberated from ignorance. This is what I have realized among our people in this part of the world. In advanced world, people do a lot of researches before they take a position on issue. But here, we just jump into conclusion without having relevant information to justify our position. 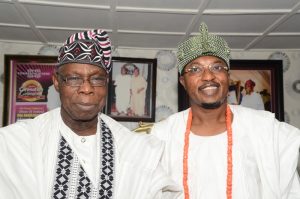 Kabiyesi, do you have knowledge of an Imam to lead such a large congregation?
I am not only adequately equipped as one who is versed in the Qur’an but I am also qualified as the religious ruler of Iwoland to lead the prayer. Do you think it is possible for an ignorant to rule over a town of many great Islamic scholars? Iwo’s strong tie with Islam and the North is well acknowledged in any part of the world. In Yorubaland, Iwo stands out as a town where Islam is deeply rooted. History of Islam in Iwo cannot be written without mentioning the Oluwo called Oba Alausa who brought the religion into the town. He was the one who led the people in prayer and helped the religion to spread and made Iwo a strong Muslim community. As I am telling you, the Oluwo must first be turbaned before traditional akoko leaf is inserted in his cap. Go and see the picture of my installation to confirm what I am saying. This is a town of Islamic scholarship. No other town in the South-West can boast the number of scholars we have in Iwo. Because we understand Islam very well, Christianity is also practised here in a free and peaceful atmosphere. Bowen University, which we are proud of today and which has registered our name on the list of Nigerian university town, is owned by the Baptist Church. And you can see we live in harmony. So, I am qualified and my people have confidence in me. Go to the North, emirs lead prayers there.

Was there an understanding with the Chief Imam because it was reported that you pushed him aside to lead the prayer?
I shouldn’t react to such fallacious report. Can you even believe such? Is it possible to do such before a large congregation? There was nothing of such. I told my Chief Imam that I needed to lead the prayer to send a message to the world and to other obas that their responsibilities to their people include religion. A Christian oba also has the obligation to lead service in the church. But he must be clean. I used it to show God that I am clean and upright with what He has sent me to do in the world. I have no secret pact with any other person aside from Him. I observe that Muslims and Christians don’t want to become king again because they are scared. They are scared that the stool is all about fetish things. It is not. We have the responsibility to make the palace attractive to the people. We should not derail from the path of God which makes it an obligation to be just to our subjects. Once an oba is just, he has nothing to worry about or fear about. I am saying it again that we should always be conscious of the day we are returning to God and give a report of our reign. I am happy that my people are with me in this crusade as you can see that they always surround me either in the palace or on the street. I am accessible to everyone because they are my people whom I must serve with all God has given me. An oba must not amass wealth. He must rather share his wealth and make his people happy because he is the father they look up to. This is not encouraging laziness. It boosts genuine love among the people. I am happy that I am enjoying that in my people, from my chiefs to everyone, including Christians.

Okay, can you also lead Jumat prayer on Friday?
Why not? I have said it that I am not only a traditional ruler like other Yoruba obas. I am also a religious ruler. I am a ruler ordained by God, the Creator of all of us. It is unfortunate that we are not living our status. We are not the ruler. God is the ruler. We are only His representatives on earth and we must live that status, and not reduce it to ordinary. How do I mean? We must not bow to any lesser god or do anything God does not encourage us to do. We are supposed to be aboveboard and live by example at all times because we have Somebody up there that watches over us and takes note of our actions and our inactions. We are returning to Him one day to give account of how we represented Him.

Don’t you think wearing a crown, seen as a symbol of Yoruba tradition to lead Islamic prayer, was odd and contradictory. Why not wear a turban and ordinary cap?
Wearing a crown to lead the prayer is my way of submitting myself to God. Don’t forget that Islam means total submission to the will of Allah. I have worn a bigger crown to pray at Jumat. I wore it with heavily embroidered aso oke to show my humility to God. There is nothing bigger than God, including crown and any other paraphernalia of the stool. Because my crown is clean, I have no reason not to wear it to pray to God. 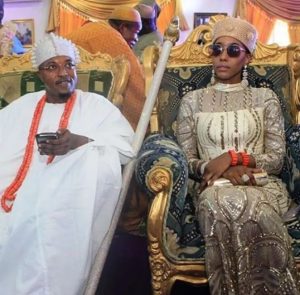 Why do you also carry a long staff instead of horsetail with which obas are customarily identified?
I use both the staff and horsetail. But I must tell you that the staff I hold is more symbolic in the history of my town. There is a parrot on top of the staff. Doesn’t that tell you the story of Iwo? Parrot is as important to us as the town itself. That is why in our panegyrics, parrot features prominently. I am comfortable holding the staff anywhere because it is a way of showcasing the history of my town to the world. Wherever I go, either home or abroad, I will always hold it and be ready to answer any question arising therefrom.
Observers are however watching if this “modern” king will bow to pressure abd take a break or continue with his “swag.”