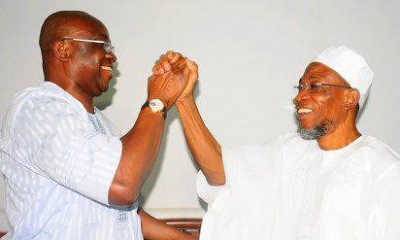 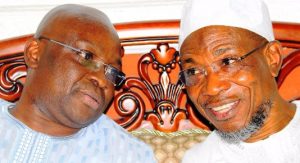 THE crisis in the South west chapter of the All Progressives Congress, APC, took another turn after the Ekiti State chapter flayed Governor Rauf Aregbesola of Osun State over his recent visit and commendation of Governor Ayodele Fayose of Ekiti State.
The assertion of the Ekiti State chapter of the party was immediately rebuffed by the Osun State chapter which lampooned the Ekiti State chapter for not recognising the political maturity displayed by Ogbeni Aregbseola in his visit to Governor Fayose, weekend.
The war of words was not helped by claims that the two chapters were acting as proxies for larger interests in the party in the Southwest.
Aregbesola, a close ally of APC national leader, Asiwaju Bola Tinubu, according to sources, was perceived to have hurt the interests of former Governor Kayode Fayemi, who controls the Ekiti State chapter of the APC when he visited Fayose and praised the Ekiti State governor.
Fayose, a member of the Peoples Democratic Party, PDP, was commended by Aregbesola for being an “omoluabi” and a hardworking governor, who had turned around the fortunes of Ekiti State in terms of infrastructure.
Political stakeholders also made insinuations that the Tinubu camp was, by the visit, trying to pay Fayemi back for his alleged support for the emergence of Mr Rotimi Akeredolu (SAN) as the Ondo State governorship candidate of the party against the perceived interest of Asiwaju Tinubu.

Ekiti APC fumes
Berating Aregbesola over his visit to Fayose, in a statement yesterday, the Ekiti State publicity secretary, Taiwo Olatunbosun, described Aregbesola’s visit to Fayose as a slight on APC.
Expressing his displeasure, the party said the visit signposted the contempt which the party and its leaders were held by the Osun governor after Fayose had caused severe pains in the lives of APC members, some of whom had been languishing in jail for about two years for offences they did not commit.
He said: “Aregbesola’s visit to Fayose praising him as omoluabi and for the achievements by APC-led government is not alone embarrassing but also awful in the face of sustained attacks on APC members, some of whom are still languishing in jail for about two years over trumped-up charges by Fayose.
“It is shocking that Aregbesola as a governor and one of the leading lights in APC in the South West and indeed the nation, would be visiting Ekiti State without putting the leaders into confidence, more so on a visit to a man, who once wished the President dead and had done unbelievable things both in Nigeria and abroad to bring Buhari’s government down.
“Worse still, Aregbesola was praising the man, who will stop at nothing to bring the APC-led Federal Government down after several years of failed attempts by the progressives to win the presidency of Nigeria.”

Osun APC fires back
Responding yesterday, the Director of Publicity of APC in Osun State, Mr Kunle Oyatomi, said: “Politicians should grow up and they should know the difference between governance and politics. Aregbesola is the head of government in Osun just as Fayose is the head of government in Ekiti. We are in a federation in which these two governors don’t necessarily have to belong to the same party.
“Their differences in political alignments do not stop interaction between the two as heads of their various governments, neither should the interaction between them be politically given.
“It will be irresponsible for any head of government to visit another head and then begin to throw political insults on him simply because one abhors the politics of another. Aregbesola has shown maturity in his interaction with Fayose. To criticise him for doing so, is not politically correct.”

@CitizenOsun
Previous LANRE OMIYINKA: The Other Side Of Comedy
Next Rauf Aregbesola: The Making Of The State Of Osun’s Political godfather