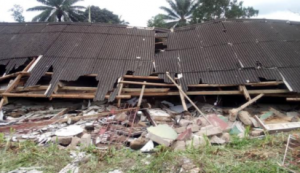 ATLEAST two worshippers were Sunday feared dead while scores of others sustained various degrees of injuries when the building they were worshipping collapsed during a church service at Adagbrassa in Okpe local government area of Delta State.

The worshippers had converged at the St. Paul Catholic Church for the Sunday morning mass when midway into the service, the building collapsed.

The church drummer, Jeffery Enukanehire, who is one of the deceased, died on the spot when a section of the building wall fell on him while drumming during a prayer and worship session.

Giving details of the incident, his father, Jefferson Enukanehire while lamenting the death of his son, said: “We had just finished the morning prayer for the 7a.m mass when the wall collapsed on my son.”

He said: “We had gone for service in company of my wife and five children when the unfortunate incident occurred. “The wall on the left side of the building collapsed and subsequently pulled the other sections of the building down on the worshippers. “My son had succeeded in freeing himself from the initial wall that fell on him when another section of the building fell and crushed him to death.”

Meanwhile, Governor Ifeanyi Okowa, has expressed sadness over the death of a worshipper in the unfortunate collapse of St. Paul Catholic Church building, Ugolo, Adagbrasa in Okpe local government area of the state.

Describing the incident as a sad and regrettable experience, Okowa in a statement by his Chief Press Secretary, Mr Charles Aniagwu despatched the State Commissioner for Works, Chief James Augoye to visit the site with a view to unravelling the circumstances surrounding the collapse of the building and how government could aid the injured worshippers and the church.

Okowa prayed for the repose of the departed faithful and condoled with the family of the deceased, the Speaker of the Delta State House of Assembly, Rt. Hon. Sheriff Oborevwori, Chairman of Okpe Local Government Council, Chief J.J. Scot, the Orodje of Okpe, HRM, Orhue 1, Major Gen. Felix Mujakperuo (rtd) and the entire Ugolo community in Okpe Kingdom over the unfortunate incidence.

The Governor said; “this is indeed a very sad and unfortunate incident. On behalf of the Government and people of Delta State I commiserate with the family of the deceased and those injured, the Speaker of the Delta State House of Assembly, Chairman of Okpe Local Government Council, Chief Julius Scott, the Orodje of Okpe, HRM, Orhue 1, Major Gen. Felix Mujakperuo (retd) and the entire Ugolo community in Okpe Kingdom over the unfortunate incidence.

“It is our prayer that the soul of the deceased will rest in peace, and that the injured will experience quick recovery. Our thoughts and prayers will continue to be with the people of Ugolo in Okpe Kingdom over this tragedy.”