Breaking News
Home / Uncategorized / CONFESSION OF A SUSPECTED RITUALIST: MY BOSS PROMISED ME N30M TO PRODUCE, DELIVER HUMAN PARTS TO BUYER IN LAGOS

CONFESSION OF A SUSPECTED RITUALIST: MY BOSS PROMISED ME N30M TO PRODUCE, DELIVER HUMAN PARTS TO BUYER IN LAGOS 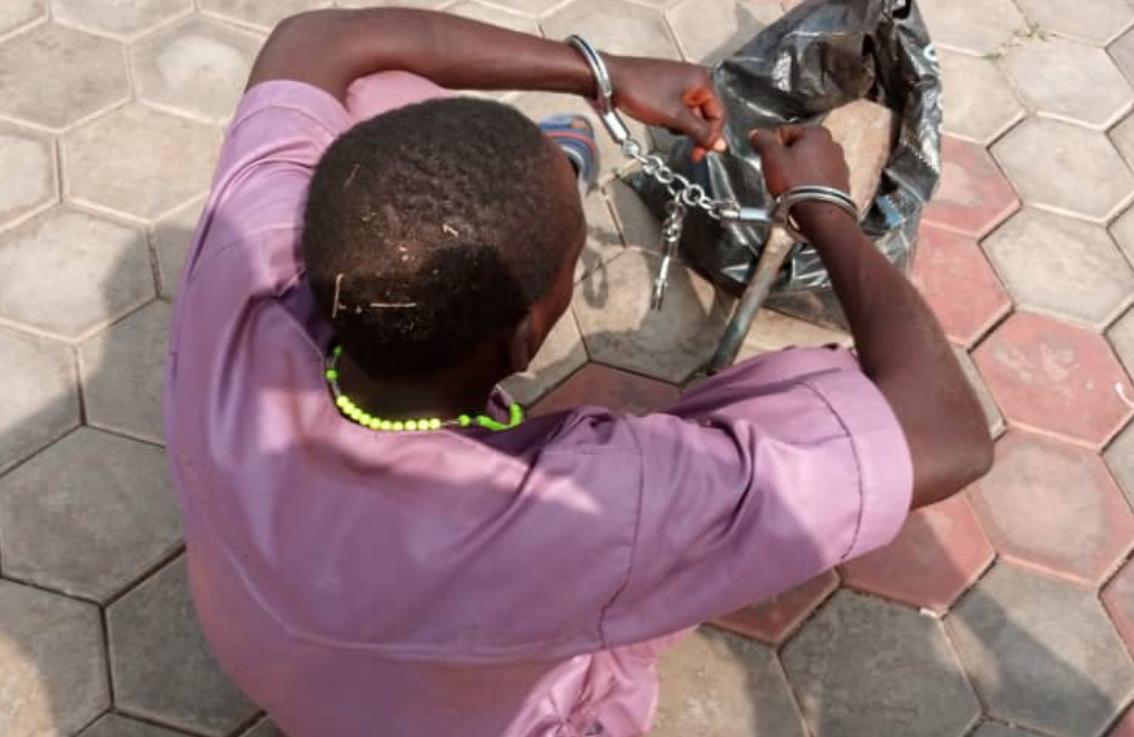 Officials of the Ondo state security outfit codenamed Amotekun have arrested a 35-year-old suspected ritualist, Timothy Odeniyi for being in possession of human parts.ADVERTISING

Odeniyi told Vanguard after he was paraded by the Amotekun that he was promised N30m if he could get the human parts and deliver to buyer in Lagos.

He was arrested in Ondo town motor park last week Sunday by men of the security outfit while conveying the human parts to Lagos.

While the state commander of Amotekun, Chief Adetunji Adeleye said the suspect killed the victim, removed the human parts and hurriedly buried the corpse, the suspect disagreed saying that he exhumed the corpse from a grave and removed the body parts.

The suspects, a truck driver who reportedly wrapped the human parts in a bag said his former boss in lbadan introduced him to the business of making money through rituals.

Speaking with newsmen, the suspect said “I went to the burial ground to cut the legs and hands of one of the corpses buried there. Before I was caught, I had planned to take the human parts to the person that sent me in Lagos. He promised to pay me N30 million once I deliver the items.

“I only went to the burial ground in Sabo area of Ondo town to cut the parts, I didn’t kill anybody and this is my first time. I used to be a trailer driver

“The person that sent me used to be my boss when I used to drive truck. I used to dump it in a waste bin and he will send those who will pick it.”

However, the Commander, Chief Adeleye who dismissed the claim of the suspect, said that the suspect killed someone before severing the parts and buried the victim in a shallow grave.

Adeleye said “We want to intimate the public on the need to be very careful. Of late, the trend is shifting gradually from daily kidnapping to ritual killings.”

” The public should be generally careful about the craze to make money by these young men.”

“We have a suspect in our custody, Timothy Odeniyi who was caught and arrested with legs and hands of human being wrapped in paper.”

“Upon interrogation, he took us to where he severed the body of the person killed and hurriedly buried the person in a shallow grave.”

“We want to warn the public to be careful of who they go out with. We have a number of them that we are still investigating that will go out with their girlfriends solely for their purpose of killing them for ritual purposes. I think the public should be wary and careful about this.”

Speaking on those arrested last month, the Amotekun boss said that no fewer than 35 suspected kidnappers, armed robbers, ritualists, vandals were arrested.

Adeleye added that “underage herders as well as criminals who disguised as scavengers were also arrested in various parts of the state.”

“Within this January, we arrested about 150 suspects of various crimes and out of them 32 are still currently with us.”

“Some of them are suspected kidnappers, armed robbers and some of them were involved in the vandalisation of132 KVA power lines under construction.”

“Some of them were ex-convicts that ran away from prison cells, some of them jumped bail and were rearrested.”

”Some of them pretend as if they are scavengers but we found weapons, guns, locally made pistols in their trolley.”

“The teenagers among the suspects were caught contravening the underage anti-open grazing law.”

” They were found to be grazing with about 300 cows. They were about 10 to 11 years of age. We are still waiting for their parents to come and face the music.”

Adeleye added that ” some of them will be handed over to the police for further investigation, especially the homicide issue. After discreet investigation, the remaining ones will be taken to court for prosecution.”