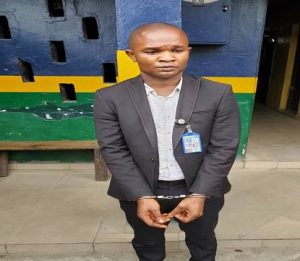 The police in Lagos have arrested a 29-year-old man Emeka Emmanuel alleged to have impersonated the Economic and Financial Crimes Commission (EFCC).

Emmanuel was arrested on Saturday morning at Iyana-Iba in Ojo for allegedly defrauding innocent people under the guise of providing jobs for them at the EFCC.

Police said the suspect was found with a fake EFCC identity card in his possession which he allegedly used to deceive his victims.

It was gathered that his arrest followed complaint by one Olaposi Semiu at the Ojo Police Station that the suspect collected N51,000 from him over a month ago with a promise to secure his son an employment at the EFCC.

Police spokesman Bala Elkana, a Deputy Superintendent (DSP), said Emmanuel confessed to the crime, adding that detectives also discovered he was running an illegal medical facility at his premises.

“Other items recovered include medical equipment and fake certificates. The command is advising the public, especially job seekers, to be mindful of the activities of such scammers to avoid falling prey of their antics. Investigation is ongoing and the suspect will be charged to court,” he said.

@CitizenOsun
Previous ENUGU: AFTER A HANDSHAKE WITH HIM, MY MANHOOD REFUSED TO STAND – Man cries out
Next THREAT TO LIFE, DEFAMATION: DAMMY KRANE ARRESTED, RELEASED ON BAIL