Breaking News
Home / News / NIGER: I KILLED MY FATHER BECAUSE HE WANTED TO SACRIFICE ME TO HIS CULT GROUP – Murder suspect

NIGER: I KILLED MY FATHER BECAUSE HE WANTED TO SACRIFICE ME TO HIS CULT GROUP – Murder suspect 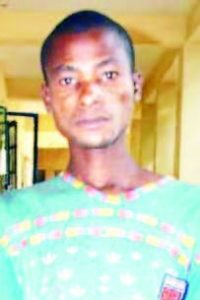 Policemen in Niger State, on Sunday, arrested a 40-year-old man, Bisso Aminu, for allegedly killing his 65-year-old father in Yingu village in the Rijau Local Government Area of the state.

The suspect was trailed and arrested by a team of detectives attached to the Rijiau Police Division based on credible information.

It was learnt that the suspect’s father, Aminu Allahbani, attempted to sacrifice his son to his cult as payback for an earlier undisclosed favour.

Northern City News gathered that when the suspect realised that his father wanted to use him as a sacrificial lamb, he attacked him with a hoe while the latter was asleep.

In an interview with our correspondent, Bisso said, “I can never regret killing my father because he never meant well for me; he almost succeeded in using me for a sacrifice to please his cult members.”

“I am ready for the worst. I was smarter than him; I killed him when he was sleeping to avert his evil intention of killing me.”

“I noticed that my father’s attitude towards me changed with the way he was treating me and I asked him what caused the change but he refused to talk to me.

“When it was obvious that he had made up his mind to sacrifice me to his group, I had no other option but to kill him.”

The command’s Public Relations Officer, Mohammad Abubakar, confirmed the incident, saying the suspect had confessed to the crime.

Abubakar said Bosso would be arraigned in court after investigation.