LAGOS: HOW TENANT AND HIS ACCOMPLICE KILLED LANDLORD 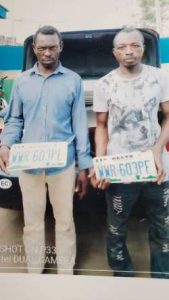 HOW TENANT AND HIS ACCOMPLICE KILLED LANDLORD

38-year-old tenant, Daniel Isaac, has been arrested for allegedly killing his landlord in his apartment at Owodun street, in Ikotun, a Lagos suburb, weekend.

Arrested alongside, was his alleged accomplice, Emmanuel Chukwu. The suspects were said to have dumped the body of the 50-year-old landlord popularly known as Don Abel, inside the well, apparently to make it seem that he drowned.

Thereafter, they zoomed off in the deceased’s Toyota Camry car with plate number WWR 603 PE, to sell.

But they were flagged down by policemen, attached to Iba division who were on a stop and search routine work, at First gate, Agboroko area of Iba, owing to the reckless way the vehicle was being driven.

The suspects as gathered were subjected to questioning on ownership of the vehicle but could not provide relevant answers.

Preliminary investigation according to the Lagos State Police Public Relations Officer, DSP Elkana Bala, revealed that the car did not belong to either of them.

He said, “Further investigation revealed that   Isaac killed his landlord who hailed from Rivers State and dumped the corpse in a well. “They confessed to the commission of the crime. Homicide detectives from State Criminal Investigation Department Yaba are investigating the case. Suspects will be charged to court thereafter”.

@CitizenOsun
Previous BAUCHI: YOU ARE TOO POOR TO PROSECUTE ME – Alleged rapist of 13-yr-old girl boasts in mother’s presence
Next LAGOS: TRADER RAPES WOMAN, LEAVES HER BLEEDING