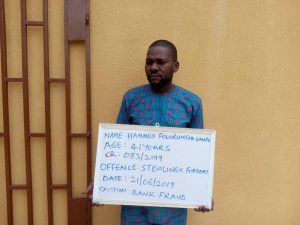 The Economic and Financial Crimes Commission, EFCC, Ilorin Zonal Office, has arrested a forty one year old Civil Engineer, Hammed Folorunsho Lanre, who allegedly withdrew money from his friend’s bank account without his knowledge, through the use of Automated Teller Machine, ATM.

Hammed, who resides at 72, Oke-Amun, Off Government road in Ikotun area of Lagos State came to Ilorin to visit his Friend, Hammed Muritala, collected his pin numbers and transferred the sum of N540, 000 (Five Hundred and Forty Thousand Naira) into his wallet in bet9ja account.

Trouble started when the suspect’s Friend wrote a petition to the Commission, alleging that the said sum was fraudulently transferred from his account domiciled in Stanbic IBTC.

The Commission, while investigating the petition, discovered that the said money was transferred into Hammed’s wallet in bet9ja’s account.

The EFCC, however, traced the suspect to Lagos where he was arrested. The suspect will soon be charged to Court.