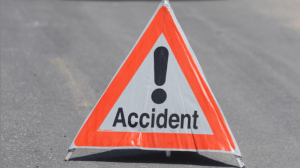 An unmarked Toyota Avensis car bearing female school children has crashed at the Olorunsogo stretch of the Abiola Way, an arm of the Abeokuta inner city roads, killing five of the eight occupants and injuring two others yesterday morning.

The car suspected to have been driven by a drunk driver, was sighted “speeding” and “driving dangerously”, which witnesses said led to a tyre burst before it crashed “uncontrollably” into a side of the road.

The Public Relations Officer, Ogun State Traffic Compliance and Enforcement Corps(TRACE), Babatunde Akinbiyi, who confirmed the accident, stated that victims have been evacuated to the

Akinbiyi attributed the cause of the accident to “over speeding, dangerous driving and burst tyre leading to loss of control” even as he suspected that the driver, who had escaped from the accident scene, was probably drunk at the time.

“The number of occupants can’t be ascertained as at the time the rescue team got to the scene, but certainly there must be a driver who drove the vehicle and escaped from the scene.

“Number of people presumed to be involved in the accident is eight. The driver is presumed to have escaped from the scene before the rescue team arrived.

“Number of injured: two males. Five are presumed dead – five young females (between ages 11 and 22). Four other persons were later brought to the Federal Medical Centre (FMC) Abeokuta, who were said to be in shock after receiving the death of the students,” stated Akinbiyi.