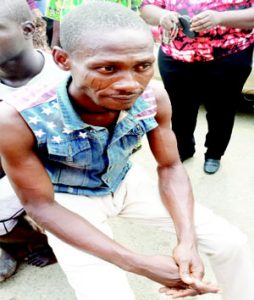 The septuagenarian, with an undisclosed identity, was on her way home on January 1, but missed the way.

While asking questions from commuters on how to get to her base at Ketu, from Maryland, Ikeja, Jelili, was said to have offered to take her there, in his bus.

However, midway into the journey, Jelili reportedly detoured to Oloti village, off Adeniyi Jones, where he allegedly raped her.

While at it, the victim raised the alarm that attracted someone in the neighbourhood, who alerted the Police.

Parading the suspect before newsmen yesterday at the command’s headquarters, Ikeja, the command boss, Imohimi Edgal, said: “Policemen, who were informed, were directed to the location where the cry emanated from. “They caught the suspect in the act and rescued the old woman, who was already bleeding from her private part as a result of the assault on her dignity.

“The victim has been taken to the hospital and she’s being counselled by trauma specialist, while, the suspect will be charged to court as soon as investigation is over.”

However, the suspect denied the allegation, saying that his wife’s friend, who saw him with the old woman, raised the false alarm.