LAGOS: I STAYED WITH POLICEMAN’S CORPSE FOR 10 HOURS AFTER KILLING HIM – Traditional ruler 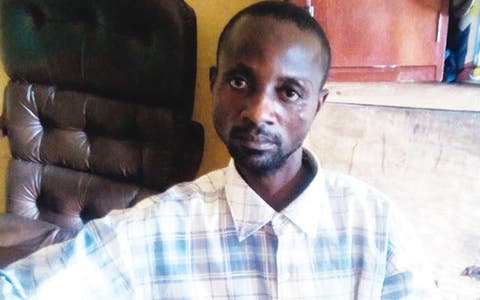 Tsekar reportedly killed the policeman, Gbenga Adeboyejo, a corporal, after a charcoal business deal between them went awry.

The ruler was said to have murdered Adeboyejo on a farm in the neighbourhood on November 27 and buried him with his phone.

Our correspondent learnt that the policeman lived in the community while his family is based in Ilorin, Kwara State.

It was gathered that the incident happened two days after he returned from a visit to his family in Ilorin.

City Round also gathered that the deceased’s father, Joseph, became worried when he could not reach the corporal on the phone. So a case of missing person was reported at the Ogun State Police Command and investigation was commenced.

Saturday PUNCH learnt that Tsekar was arrested by detectives based on the information gathered from Joseph and some residents of the area.

Speaking with our correspondent during the week, 32-year-old Tsekar, who hails from Benue State, said Adeboyejo had on October 26 contracted him to produce charcoal for him, adding that the policeman paid him N97,000 out of the N150,000 they agreed on for the work.

After striking the business deal, Adeboyejo was said to have travelled to Ilorin where he spent two weeks. On his return on November 26, he reportedly met with Tsekar to know the progress of the production.

Tsekar recalled, “On October 26, he (Adeboyejo) gave me N97,000 to help him cut wood to produce charcoal. I just started processing the wood when he told me he wanted to travel and that he would be back in two weeks’ time. By the time he came back, I was already done with some aspects of the production.

“Around 7pm on November 26, he came to my house and asked me to take him to the farm so he could see the progress of the production. I told him it was already late and that he should wait till the following day. He left in anger.”

The community leader explained that he and Adeboyejo went to the farm around 9am the next day, but the late policeman was not pleased with the work progress, complaining that the production was too slow.

Tsekar continued, “He said the wood ought to have been on the fire. I told him to be patient and that I needed more than two weeks to finish the work. He started shouting at me. I asked him to take it easy. When I noticed he was very annoyed, I told him to let us leave the farm. He felt I did not take him seriously, so he picked a log of wood to hit me.

“He hit me with it twice and as he wanted to hit me the third time, I blocked it with my hand and collected it from him. We started fighting. He picked another log and hit me again. I used the log I collected from him to defend myself.

“As I wanted to hit him with the wood, he tried to dodge and it landed on his head. He fell on the ground. After a while, I noticed he was not moving. I sat with him from that morning till around 7pm, thinking he would recover so that I could take him home because he did not know the route very well. When he did not recover, I dug the ground and buried him with his phone so that no one would trace the incident to me. I was afraid of being arrested. Since I got to the village in 2003, I was never arrested by the police for any crime. I am the head of Tiv community in Odeda.”

Tsekar stated that he and Adeboyejo had been working together for a long time, adding that he was supposed to collect a balance of N52,000 after completing the work.

The state Commissioner of Police, Ahmed Iliyasu, in a statement on the murder, had said that the suspect would be charged to court on completion of investigation at the Homicide Section of the State Criminal Investigation and Intelligence Department, Eleweran.

He said the deceased was reported missing on December 1 by his father, Joseph.

The statement read, “On December 1, Joseph Adeboyejo reported to the police that his son visited him in Ilorin and told him about the charcoal business he was doing with one leader of the Tiv community in Opeji village.

“He further stated that while the corporal was with him, he received a call from the said Tiv man informing him that his charcoal was ready, consequent upon which he left Ilorin to meet the man.

“The father said his son called him on the phone when he reached the man’s house but after some time, he couldn’t reach him or hear from him again.

“After serious investigation, the community leader was arrested. The suspect confessed to killing the police corporal by hitting him on the head with a heavy log in order not to refund the money he collected from the deceased.

“This is not only wicked and callous but also a superlative degree of effrontery because the suspect knows very well the status of the deceased.”

@CitizenOsun
Previous N29M FRAUD: EX MD OF CENTURY MICROFINANCE BANK; OLISE ROBINSON SENTENCED TO 19 YEARS IMPRISONMENT
Next DELTA: MY SON WAS STOLEN WHEN HIS ELDER BROTHER WAS SENT ON AN ERRAND – Dad Cries Out