These two Nollywood personalities have been on the front burner of husband-snatching episodes since Daniel Ademinokan, a producer/filmmaker abandoned his wife, an actress, Doris Simeon and took their only child along with him to the United States to live with  Stella Damasus.
Doris claimed not to know when Daniel went away with their son, David.
Although the child’s custody suit is still in court, it’s obvious there is an out-of-court settlement between the estranged couple on the child because Doris seems less bothered on the issue.
Stella, a widow of the late Jaiye Aboderin, who died mysteriously at the age of 33 while playing basketball with his friends, had two daughters for him before he died.
She later married a businessman, Emeka Nzeribe.
The marriage with Nzeribe lasted for only nine months, crashed and the pretty actress relocated abroad with her new husband, Daniel.
The Valentine’s Day message reads;
He wrote: “While people across the Atlantic are waiting for the announcement of a wedding date, I celebrate you today my beautiful WIFE @stelladamasus. You came into my life and gave me the right perspective. Thank you for being such a supportive wife, a remarkable mother to our kids and the glue that holds this home together. EVERYBODY deserves another shot at getting it right with love. I’m glad I got my second shot. Thank you for loving me the way you do. Even when I do things that deserve time out in the microwave , you love me still. Every single day, I just can’t wait to come home to you because you are my SAFE PLACE. With you, everyday is Valentine’s Day. I love you. #HappyValentinesDay #HappyWifeHappyLife #MyRib #MyWife #YouCompleteMe #DaBishopChronicles” 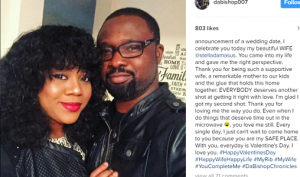