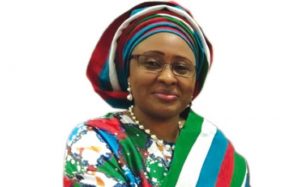 Wife of Oyo State Governor, Mrs. Florence Ajimobi, will, tomorow, host the wife of the President, Mrs. Aishat Buhari, and wives of governors across the country as they converge in Ibadan for the fifth edition of the National Women’s Summit. The summit, themed, ‘The ultimate woman at a time like this,’ is being organized under the auspices of the Oyo State Officials’ Wives Association, OYSOWA, under the leadership of the governor’s wife. According to a statement from the Office of the wife of the Governor, the three-day event will  also witness an award ceremony where some distinguished women would be specially recognized for their contributions to national development and achievements. Among those slated for  recognition are the first female Senior Advocate of Nigeria, Chief Folake Solanke; wife of the Minister of Power, Works and Housing, Mrs. Abimbola Fashola; and the first female Speaker of the Oyo State House of Assembly, Senator Monsurat Sunmonu. Others are President, Lagos Chamber of Commerce and Industry, Chief Onikepo Akande; leading industrialist, Mrs. Ibukun Awosika; an indigene of Oyo State, who emerged the 2016 best graduating medical student at the International University of Africa, Khartoum, Sudan, Miss. Oluwatoyin Islamiyat Abdukadir and Pastor Omowumi Popoola. Slated to speak at the event are Messrs. Nimi Akinkugbe of Bestman Games Ltd.; Nike Adeyemi of The Real Woman Foundation; Foluke K. Abdul-Rasaq of UBA Nigeria; and Tara Fela-Durotoye of House of Tara. The statement added that Heritage Bank Nigeria would also receive a Special Appreciation Award for its commitment to women empowerment.