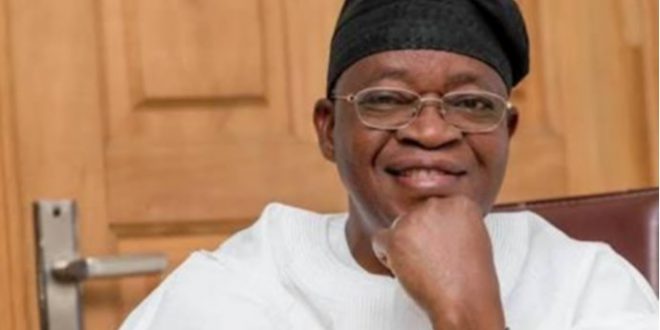 LEADERSHIP in tough times requires men with clear vision and a rare sense of service that will add values to the populace and for the good of all.

Governor Gboyega Oyetola of Osun state, who hails from Iragbiji in Osun State recently celebrated his 60th birthday, born September 1954, had his primary and secondary education in Ifeoluwa Grammar School, Osogbo, and further moved to the prestigious University of Lagos for his Bachelor’s degree and later a Master’s degree in 1978 and 1990 respectively.
He is a man with cognate experience in political administration and governance having served in Ex Governor Rauf Aregbesola’s eight-year administration as the Chief-of-Staff since 2011.

Oyetola’s imperative capabilities as the then Chief of Staff made him relevant and convincing, that he earned the support and confidence of civil servants, politicians, youth and the citizenry.

His innate characteristics depict a man who can lead, define and address issues without aggravating the problems.

At a time Osun State needed an experienced technocrat that could confront the challenges of grappling with  the lean revenue, indebtedness, contractual  obligations, collapsed  infrastructure and unpaid salaries, the immediate past Ogbeni Rauf Aregbesola-led administration required a strategist imbued with integrity, competence, sacrifice and ability to wriggle the state out of the  scary economic predicament as a Chief of Staff.

The searchlight beamed on Gboyega Oyetola to help initiate improvements, cultivate new innovations in the provisions of infrastructure and to unwaveringly render corresponding services to the state as a tested technocrat and successful businessman.

On the assumption of office, Gboyega Oyetola improved upon the existing policies of the government and within a short time, the administration confronted the hydra-headed challenges headlong and laid a solid foundation of prosperity.
With his imperative leadership style of distributing and applying material and manpower resources at every opportunity, his philanthropic gestures travelled to places he has never been to and endeared him to the grass roots and the people, portraying him as a progressive politician who helped renew public trust and confidence in the government.

In recognition of his sterling qualities in all spheres of life, he has been decorated with an array of awards of leadership, outstanding performance, and excellence in public service.

As the Area Manager at the Leadway Assurance Company Limited between 1980 and 1987, Gboyega Oyetola displayed obsessive assertion to operations and ensured the product lines under his watch yielded bountiful gains for the company.
In the sharks invested waters of Insurance, he stayed afloat as the underwriting Manager between 1987 and 1990 at the Crusader Insurance Company Limited before he joined the Alliance and General Insurance as Technical Controller till 1991.

As a man above average in his ability and quality, he desired freedom and veered off corporate world and flung his whole life into business.

With candor and experience, he swiftly responded to the challenges of the new environment to establish SilverTrust Insurance Brokers Limited, where he deployed dynamic interaction and financial acumen to competitive advantage, battled ceaselessly over market shares and created a template for a profitable growth in the future for the company.

His strategies; thinking and ability to excel at all times prompted his appointment as the Executive Vice Chairman at the Paragon Group of Companies, with interests in Oil and Gas, Mining, and Real Estate since 2005 until 2011.

Adegboyega’s business acumen and ability to understand the fundamental practice of management threw at him the Chairman’s seat of Ebony Properties Limited, having served as a director at Pyramid Securities Limited.

Cerebral and enigmatic, he has demonstrated bravery, sagacity, and love for the people.

Gboyega Oyetola’s coming to the helm of affairs in Osun with a roadmap towards setting explicit targets and creating necessary growth that will safeguard the lives of the people, empower and create jobs for the teeming youths, protect the integrity of the private sectors, give life to start-ups, raise innovative entrepreneurs, give confidence to investors and sustain the momentum of growth.