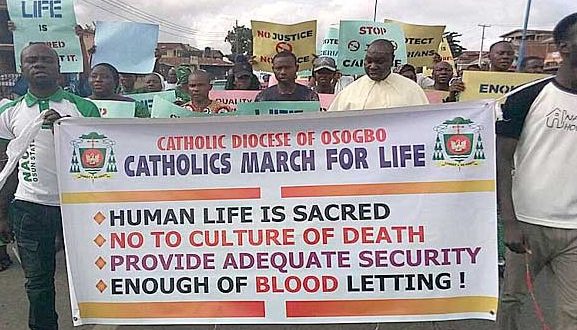 Members of the Catholic Diocese of Osogbo in Osun State on Tuesday protested  killings of innocent Nigerians in many parts of the country.

They described the incessant bloodletting as wicked and barbaric, saying: “Nigeria now flows with blood instead of the honey.”

Carrying their rosaries, Bibles and placards with various inscriptions, the protesters called on the Federal Government to find immediate solution to the killings.

Some of the placards displayed by the prayerful demonstrators read “Enough is Enough,” ” Stop Incessant Killings Now” “Embrace The Culture of Life, not that of killing ” “FG should bring Killer herdsmen to justice,” “Provide job for youths and not guns” “Human lives are sacred,  protect it, ” among others.

Members of the church in Osogbo, including the priests joined other dioceses across the nation in prayer and demonstration against reoccurring bloodletting.

The Catholic mission faithful, who dressed in their various church uniforms, had converged at Our Lady of Fatimah’s Catholic Hospital, Jaleyemi and marched to the popular Olaiya junction before proceeding to the Osun State House of Assembly where they presented a statement to the Speaker, Hon. Najeem Salaam.

Speaking on behalf of the bishop, the Vicar General of the diocese, Very Rev. Fr. Thaddeus Ajayi, said the country now flows with human blood instead of honey.

According to him, the protest was in compliance with the directive of the Catholic Bishops’ Conference of Nigeria (CBCN). It’s tagged “March For Life.”

He said: “We are protesting the incessant killings taking place in all parts of our country Nigeria. We are calling on government to provide adequate security for everyone and take decisive steps in ending the current culture of death through a sincere respect for, protection and promotion of human life.”

The bishop also called on the Federal Government to issue urgent directive to security agencies in the country to provide better security for all.