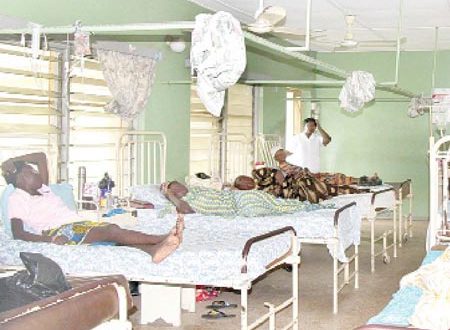 MEDICAL experts have noticed an upsurge in cases of ovarian cancer in Nigeria.

The Director of Ibadan Cancer Registry, Professor Olufemi Ogunbiyi, who disclosed this to Tribune, added that ovarian cancer is now sixth most prevalent cancer in the country, having previously not been among the top 10.

This is just as the specialist asserted that in the last 10 years, breast cancer has remained the most common type of cancer in both men and women.

He explained that in the last 10 years, in adults, “this pattern seems to be retained except that we have also noticed that ovarian cancer seems to be increasing in frequency.

In addition, cancer of the colon and rectum has become the second most prevalent cancer that is not gender-based.”

The professor of Pathology stated that although prostate cancer is the leading cancer in men, data from the registry indicates that breast cancer has continued to affect all genders and cut across all ages and social classes.

The expert, who noted that two cases of breast cancer are never the same since the genetics are different, declared that obesity and genetic makeup are some of the factors that predispose individuals to this type of cancer.

“Obesity and genetic makeup are some factors that have been established for breast cancer. We do not have specific documentation on how many of these cases are actually due to genetic predisposition but the percentage that is contributed by genes is very small.

“Around here, there has been previous documentation of people with breast cancer being typically slightly heavier than others. So, we think that this is a definite risk factor for our patients in Nigeria,” he said.

Professor Ogunbiyi, however, noted that the purported high incidence of breast cancer could be due to increase in the screening and creation of awareness activities for breast cancer in the country by different organisations.

Data from the registry, he stated, also found eye cancer and blood cancer (leukaemia) topping the list of cancers recorded in children.

According to him, “this also has both genetic and environmental influence. What plays a major role for cancers in children is still not clearly defined. However, there seems to be an improved outcome for children with these cancers over time.”

Professor Ogunbiyi declared that in the last 10 years, data from the registry indicated that prostate and colon and rectum cancers top the list in men, just as breast, followed by cervical cancer, are the commonest in women.

Meanwhile, Professor Ogunbiyi declared that over a four-year period, 2009 and 2012 inclusive, cancer had affected more women than men.

He said although cancer incidence peaks in the age group 50 to 69 years, most cancers increased in incidence from the fourth decade.

Professor Ogunbiyi said the most important thing with cancer is the outcome, stressing, “If you catch the cancer early, then you are more likely to be able to treat it.”

He declared that some cancers are more easily detected than others because of their location and available tester markers for cancers.

According to him, Prostate Specific Antigens (PSA) can be used to screen for prostate cancer, breast self-examination and mammograms for breast cancer and Pap smear for cervical cancer.

“I am still an advocate of screening for prostate cancer using PSA because that is our best chance, at least for now. Most people tend to come late and that means the outcome is not very good for them. The same thing is with breast. Of course, we also know statistically that once the breast cancer is above a particular size, prognosis is not good. But if it is picked up earlier, it is better,” the specialist said.

Nonetheless, he said that it is the aggressive type of breast cancer that is usually recorded in Nigeria, adding that this also contributed to poor prognosis of breast cancer in the country.