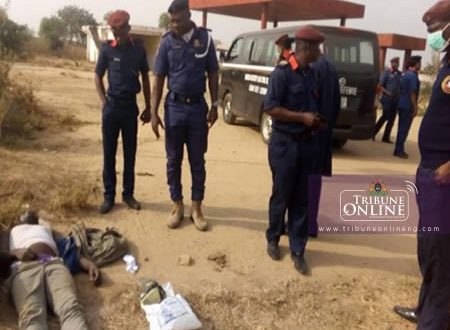 There was pandemonium in Osogbo, Osun State capital, on Wednesday, following the shocking discovery of the remains of a policeman, identified as Sunday Adejumo, near the popular Onibueja sawmill.

Though details surrounding the mysterious death of the policeman could not be ascertained as of the time of filing this report, the Assistant Inspector General of Police (AIG) in charge of Zone 11 Police Headquarters, comprising of Oyo, Osun and Ondo states, Mr Agboola Oshodi Glova confirmed the identity of late Adejumo.
He, however, assured that investigation would be launched to unravel what actually culminated into the death of the police officer.
But, findings indicated that the lifeless body of the policemen was found beside a petrol station, just as items seen with the corpse included a phone, wrist watch and Automated Teller Machine (ATM) card.
One of the people in the neighbhourhood, who spoke to journalists said “we saw this man here yesterday. He came to this sawmill to buy planks. The plank seller was expecting the man to come here today (Wednesday) and carry the planks, which he had bought. We are surprised to see his dead body this morning”.
Commenting on the incident, the Public Relations Officer (PRO), of the Nigeria Security and Civil Defence Corps (NSCDC), Osun State command, Mr Wale Afolabi said the agency contacted the Police as a result of the development before detectives came to evacuate the corpse.
– Nigerian Tribune
Nigerian police Osun state command 2018-01-11
Dotun Olanibi
Share