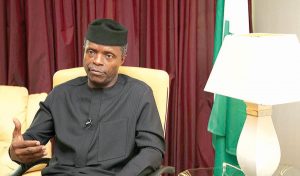 I HAVE NO PLAN TO CONTEST 2019 PRESIDENTIAL ELECTION

Vice-President Yemi Osinbajo Monday said he had no plan to contest the 2019 presidential election.
According to Reuters, Osinbajo said this when he was asked at the Financial Times Africa Summit in London if he had considered running for the presidency.

“None of that is on the cards,” the vice-president reportedly said.
Osinbajo had earlier disowned a group known as Osinbajo Volunteers, which is campaigning for his election as president in 2019.

His media aide, Mr. Laolu Akande, had asked Nigerians to disregard the group, adding that he had nothing to do with them.
The group had said Nigeria now has a “leader who has a clue what to do and (how to) turn Nigeria the beloved to the land of our dreams”.

He added that the federal government was making concerted efforts to diversify its oil-dependent economy because “we don’t have all the time in the world with oil. We have to use oil while it makes sense to do so”.