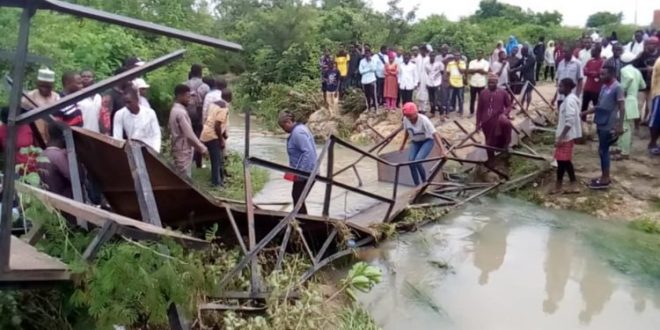 BAUCHI:
TRAGIC STORY OF HOW THREE ATBU STUDENTS MET THEIR  UNTIMELY DEATH ON A COLLAPSE BRIDGE 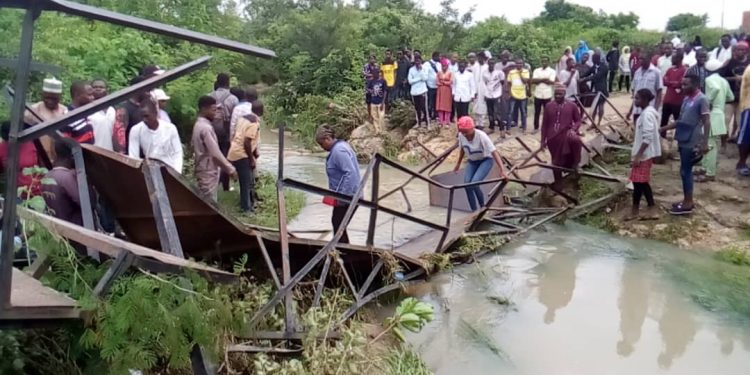 August 5, 2019 was a night of sorrow for students and management of the Abubakar Tafawa Balewa University Bauchi.(ATBU) when tragedy struck in the wee hours in the Gubi campus of the institution.

Three students of the varsity were drowned when a pedestrian bridge within the main campus of the university located in Gubi, an outskirt of Bauchi metropolis, collapsed.

The bridge, which linked the university and the hostels, was reported to have collapsed under the heavy current of the flood underneath.

Investigation carried out by the ATBU management on Wednesday revealed that three bodies were actually recovered following the collapse of the bridge due to a downpour that lasted several hours across the state after rescue operations were concluded.

The management had earlier said that 4 died in the tragic incident.

It also said no body was missing contrary to earlier claims by the students who insisted that some persons were missing.

Two females and a male and they were all from the department of business education and management studies.

One of the victims, Salmat had posted on her WhatsApp a status which was shared online by her friends after her death.

“My degree will not go up with me to heaven. Therefore, I will not come and kill myself over school. If I don’t know it by 11.30pm, I am resting my head peacefully on my pillow and going to sleep” she wrote

Salmat was reportedly buried in Bauchi on Thursday.

The Nation earlier reported that the incident, which occurred in the midnight, also left seven injured.

It was gathered that the tragedy occurred when some of the students were leaving the campus after reading overnight in preparation for exams.

The incident triggered a protest among the students, who blamed the tragedy on the school management for turning deaf ears to several pleas made by them on the deteriorating bridge.

The students’ union president, Naziru Mohammed, reportedly escaped being lynched by the students, who protested the death of their colleagues.

A student of the Varsity,Adamu Mohammad ,( of Chemical engineering department) in a WhatsApp chat with the Nation said though the incident is a natural disaster but the fact remains that is an avoidable situation.

According to him, the truth is that the incident was a natural disaster and no one can stop a flood. As fela said “water no get enemy”, but the fact is that it was also an avoidable situation.

“As we commiserate with the family of our departed fellow students and wish the dead a peaceful rest, there are a few things that i must point out about the #ATBU gubi Campus sad incident and the Gubi campus students’ situation”

“I have been to ATBU Gubi Campus as a student since past years and i must tell you that the level of negligence of students’ welfare is too bad and just not fair.
The basic needs of a 21st century human being are not sufficiently provided on campus.

” The hostels were designed in such a way that water will flow through the pipes for the toilets and rooms but overhead water Tanks are not provided for this. Students have to fetch water from dirty reservoirs and Tanks to a two storey building”

“Snake and scorpion bites are common cases in ATBU Gubi campus. There was a case of a student who was bitten by a snake in the bush where he went to defecate due to the bad condition of the toilets in the hostels”

“The Gubi campus Clinic is not equipped for an emergency situation, be it snake or scorpion bite, accidents and the events of the natural disaster proved this. Some of the students who actively involved in the student’s rescue and search and they know what they experienced that night”

“We had a right to be angry because we(students) found Salma (may her soul rest in peace) dead in one of the farmlands that morning prior to the recorded deaths immediately after the incident.

The students union government (S.U.G ) which was suppose to be our mouth piece is dysfunctional and occupied by the school management’s functus officio stooges”

“I must pause here now, for my heart is the coffin with death departed comrades”

Mohammad blamed the management for the negligence which led to the incident urged the institution to consider welfare of the students a priority.

Another student of the varsity who spoke with The Nation in confidence, said despite calls put across to the management on the deteriorating bridge , no action was taken.

“We have alerted the school authorities over the weak bridge and the poor road network leading to the university, but no action was taken” She stated.

But the university have blamed the tragic incident on selfies by students.

The ATBU Vice-Chancellor, Muhammad Abdullazeez, had said “the reports its received from some of the students were that when the rain had stopped and the students were about crossing, they found the scene excellent for them to take selfies.”

Abdulazeez revealed this when he receive Bauchi State Governor, Bala Mohammed, who paid him a condolence visit on Wednesday.

“So they started from two and before you could realise it, there were more than 30 students on the bridge standing, and that bridge was not meant for people to stand” He said.

Meanwhile, the state government has pledged immediate intervention on the collapsed of bridge at Abubakar Tafawa Balewa University Bauchi.

The State Governor, Senator Bala Abdulkadir Mohammed gave the assurance on Wednesday when he led top government officials and Heads of Security Agencies in the state on a condolence visit to the management of the university.

The Governor, who spoke through the Speaker, State House of Assembly, Alhaji Abubakar Sulaiman said the visit is to assess the areas that required urgent attention.

The United Bank for Africa (UBA) together with the Nigerian Army, have also offered to construct another bridge at any location in the university and access road in another location of the University. 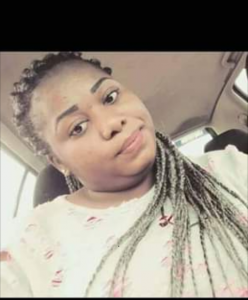