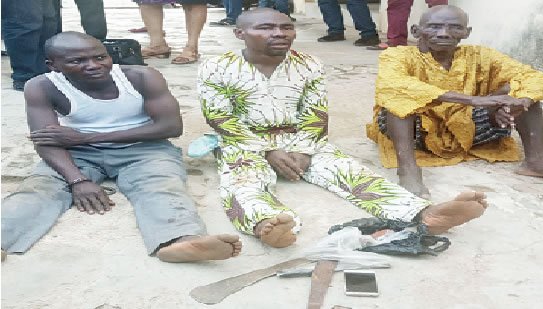 OSUN: HOW C & S PASTOR WHO WENT TO HERBALIST FOR FORTIFICATION WAS KILLED 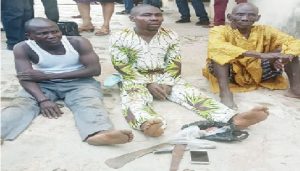 The Osun State Police Command has paraded an ex-convict, Adeoye Sina, for allegedly killing a pastor of a Cherubim and Seraphim church in Ibadan, Oyo State, identified as Emmanuel Ogedengbe.

Also paraded alongside Adeoye were Bakare Fatai and Bolanle Soladoye.

The state Commissioner of Police, Abiodun Ige, while briefing journalists about the suspects said Adeoye, who had served two years’ jail term for being in possession of human wrists, connived with five others to kill Ogedengbe.

The CP said the suspect claimed that the pastor was his client.

Ige explained that Ogedengbe and his friend, Sola Adebayo, came from Ibadan on Sunday, May 5 to meet Adeoye, an herbalist, in Oba Ile – a town in the Olorunda Local Government Area of Osun State.

The CP said after eating a concoction prepared by the herbalist, Ogedengbe became weak and was later killed by some men working with Adeoye.

Explaining what happened on the day, Adebayo, who drove Ogedengbe from Ibadan to Osogbo, said upon their arrival in Osun State, Ogedengbe told him that the herbalist could also help him with ritual to boost his business.

Adebayo said he declined the offer, adding that Ogedengbe later left with some men for an unknown place, saying he became suspicious when the clergy did not return several hours later.

He stated, “I called Pastor Ogedengbe several times, but he didn’t answer his calls. Adeoye advised me to carry the ritual prepared for me and follow him to where the pastor went to, but I said no. He put me on a motorcycle and asked someone to follow me there but I told them I was not interested.

“When I returned to Adeoye’s house, he was not happy and he ordered one of his workers to follow me to where I would eat the concoction. He collected my car key when we got to his house. I lied to him that I wanted to go and eat and he returned my car key.

Responding to questions from journalists, the prime suspect, Adeoye, who claimed to be an herbalist and farmer, denied asking his men to kill Ogedengbe.

He said Ogedengbe had approached him for help because there were no longer worshippers in his church.

He said, “I have known Ogedengbe for about seven years. He came to me for help because his church was not doing well. He lost his balance after he ate the ritual I prepared for him and drank a bottle of gin in compliance with my directive.

“One of the boys I asked to follow him to the river where he would have a bath suddenly brought out a machete and severed his head. I didn’t ask them to kill him.”

One of the suspects, Bakare Fatai, who was with Ogedengbe when he was killed, said when the pastor became unconscious after taking the ritual, Adeoye instructed him and Ahmed Omonla, who is at large, to kill the pastor.

“I was looking for money to pay my thrift when Adeyeye called me to accompany the pastor to where he would eat the ritual. After the pastor finished eating the ritual, he drank the gin and became weak.  Adeoye called us that we should kill him. It was Ahmed Omonla that killed him with a machete,” Bakare said.

The third suspect, Bolanle Soladoye, said he did not know about the crime, but was only relaxing in front of Adeyeye’s house when the incident happened.

The CP said three more suspects, who participated in the crime had yet to be apprehended, adding that all the suspects would be arraigned after investigation.

@CitizenOsun
Previous RIVERS: HOW I WAS KIDNAPPED AND RAPED – Account of a female senior lecturer
Next KOGI: GROOM-TO-BE DIES ON EVE OF WEDDING