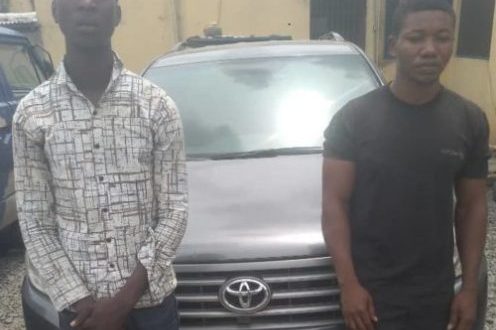 LAGOS: ROBBERY SUSPECTS ARRESTED AT THE POINT OF SELLING STOLEN JEEP …houseboy accomplice on the run 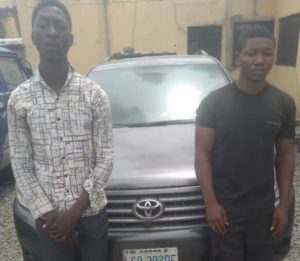 ROBBERY  SUSPECTS ARRESTED AT THE POINT OF SELLING STOLEN  JEEP

…houseboy accomplice on the run

Two suspected members of a robbery gang that connived with a fleeing house-boy to steal his boss’s vehicle, were yesterday, arrested at Ladipo market, in Mushin area of Lagos, while attempting to sell the stolen vehicle, a Highlander jeep.

Meanwhile, the house-boy, identified simply as Goodluck, is still on the run.

Explaining how the suspects struck on April 29, 2019, Mrs Abiola Abegunde, said, she left her Igando abode at about 10.30 am, to fix her faulty phone, leaving her mother and her three-year-old daughter with the house-boy.

According to her, “ I was within the vicinity, when I heard the sound of our gate opened. When I looked closely I saw the house boy Goodluck, opening the gate for my father’s highlander jeep to go out of the compound.

“Suspecting the boys reversing the jeep, I started shouting thief! But to my greatest surprise, the houseboy was with them. They reversed the vehicle out of the street into the adjoining street which is Busari street, where the house-boy stood. He was also shouting thief, to convince passers-by”.

She said that the matter was reported at the Igando police division.

Explaining how the vehicle was recovered, spokesman for the Lagos State Police Command, DSP Elkana Bala, said, “ Luckily on May 1, 2019, at about 5:30pm, one Arifayan Tosin went to Ladipo market, Mushin, to sell the said Toyota highlander jeep with registration number LSR392DE with pretence that his father instructed him to sell the car.”

“Unfortunately, the buyer dialled the phone number in the particulars, only to be informed that the vehicle was removed from where it was parked at Igando. ”

“Immediately, he contacted the Area Commander D, Mushin, who mobilised policemen and got the first suspect arrested. Further investigation led to the arrest of the second suspect Ramond Ado, a security guard with Fundamental Guard attached to Ajose street Mende, Maryland . Efforts are still on to arrest fleeing Goodluck”.