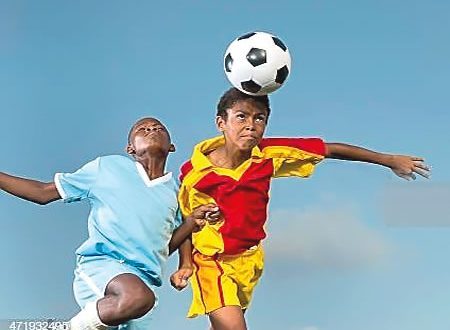 There are not too many children and adolescents that would say no to football. Whether it is throwing, dribbling or kicking a ball around, the game provides hours of simple fun and much-needed physical activity, while the players learn about teamwork and sportsmanship.

Yet, setting ground rules about throwing balls, indoors or outdoors, heading balls and enforce them are important to prevent injuries. Heading in football, for instance, may damage nerve cells in the brain.

Research results on the damage heading the soccer ball does to the brain have been pouring in lately with Dr Anthony Marinho, at the 20th annual Benjamin Oluwakayode Osuntokun Memorial Lecture, warning against children heading the ball because of its damaging effect on the brain.

The expert cautioned parents about heading of the ball by youths, saying its long-term damage to the brain could impair their cognitive performance later in life.

Playing or hitting the ball with the head comes from the north of England. It became an integral part of soccer after the Football Association in 1872 added a new rule forbidding the ball contact with hands.

Dr Marinho stated that even the voluntary punch in boxing, heading in football and helmet-butting (in American football) often result in brain injuries that are termed medical chronic traumatic encephalopathy, a condition that in future can predispose to suicide, rage, murder, dementia and early onset Alzheimer’s disease.

“This is made known by the tenacity of Dr Ifeakandu Bennet Omalu, a Nigerian American neuropathologist, who has since called for the banning of heading the ball during football games,” he said.

Omalu made the statement on the BBC, shortly following the death of former England and West Brom footballer Jeff Astle. An inquest into his passing ruled he died from brain trauma caused by heading heavy leather footballs.

Dr Omalu believes heading is “dangerous” and “does not make sense” and as such should be restricted in the professional game and banned for those under the age of 18.

He discovered the brain disease chronic traumatic encephalopathy (CTE). The condition has long-term effects and is caused by repeated head injury.

Dr Temitope Farombi, Consultant Neurologist at the Chief Tony Anenih Geriatric Centre, University College Hospital (UCH), Ibadan, stated that heading of balls, especially in persons below 18, could be dangerous because it can cause a concussion.

She said: “Concussion, in simple terms means the brain shaking within its enclosure. The brain is like a thick pap that is within the skull and its covering. However, it can still move. Basically when you hit your head on the ball, the brain moves and the movement can cause injury within the brain. These are small injuries that are not apparent; however, it can have a lasting effect even as they grow older. The cascade of such brain injury can stimulate health problems such as dementia and Parkinson’s disease with age.”

Dr Farombi cited Mohammed Ali, the great boxer, who ended up with Parkinson’s disease as a result of frequent punching on his head.

“The frequent punching in the course of his boxing career to his head is what translates to him having Parkinson’s disease because of the injury to his brain,” she added.

Dr Farombi said heading the ball in children is discouraged just like shaking of babies because of its effect on the brain, adding, “it is the vigorous shaking; especially in children, that causes the problem, what is termed shaking baby syndrome.”

Excessive shaking of the brain—excessive subconcussive and concussive trauma—can lead to cognitive symptoms, including memory problems as well as behaviour and mood problems such as anxiety and depression. Other symptoms include trouble with sleep, light-headedness and headaches

Research on the damage heading the soccer ball does to the brain indicate its incidence is high. Research from Seattle Children’s Research Institute and UW Medicine’s Sports Health and Safety Institute said damage footballers do to their brains when they head the ball among football players aged between 5 and 14 were higher than previously reported.

Prior studies had underestimated the incidence of concussion in youth football because they relied on incomplete injury reports from team managers, coaches or other data sources.

A study from neuropathologists at the University College London also linked repeatedly heading the ball over a long period of time and mid-life dementia.

They looked at 14 retired soccer players who died after being diagnosed with dementia, and 12 of the 14 had advanced dementia, and six brains studied postmortem showed increased levels of proteins associated with Alzheimer’s dementia while four showed signs of Chronic Traumatic Encephalopathy (CTE).

Another study involving former American football players who had passed away found that 90 of 96 of them had CTE, and many of them died in mid-life due to suicide.

Is there a threshold of force below which a person can safely head a ball? The science isn’t there yet. The threshold that predicts the linear and rotational accelerations needed to cause a concussion still needs to be determined.

There are a lot of biological factors that influence whether that human being has a concussion: How many concussions that person has had before, how severe those concussions were and how close together they occurred.

Other factors include age, neck strength, hydration status and gender. Experts say that it is easier to be concussed at an earlier age than at an adult age, and the recovery is slower. A concussion is also more likely to occur in men and those that are dehydrated.

Also, the Canadian Academy of Sports Medicine recommended that children should strictly avoid hitting the ball with the head to decrease the frequency of head injuries in soccer players, including concussions.

@CitizenOsun
Previous NIGER: ‘I KILLED MY WIFE FOR SLEEPING WITH HER EX-BOYFRIEND’
Next EDO: MAN, 35, KILLS WIFE, SONS, OVER INFIDELITY