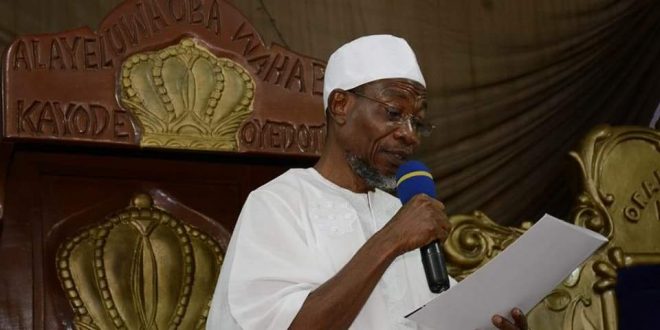 BARELY 27 days to the conduct of September 22 gubernatorial poll in Osun, the governor of the state, Mr Rauf Aregbesola over the weekend declared that the gale of defection rocking the ruling All Progressives Congress (APC) cannot stop the victory of the party during the exercise.

Apparently reacting to the defection of his former Secretary to the State Government (SSG), Chief Moshood Adeoti, who is now the standard bearer of the Action Democratic Party (ADP) and the erstwhile chairman of the Osun State Local Government Service Commission, Chief Peter Babalola that dumped the APC for the Peoples Democratic Party (PDP), the governor said “defection has made us known those that are genuinely with us and those that are not with us.”

In a press statement signed by Aregbesola’s media adviser, Mr Sola Fasure, which was forwarded to the Tribune Online in Osogbo on Sunday, the governor averred that “the gale of defection could not in any way affect the victory of the party”, saying “APC remains strong on account of its wide acceptance by the people.”

Aregbesola, who addressed APC supporters in Ilawo community of Ejigbo local government during the birthday ceremony of the Speaker, Osun State House of Assembly, Hon Najeem Salaam was quoted to have stated that he and members of his political party were not in any way deterred by the defection of some members of the party to opposition parties.

According to him, “This defection has made us known those that are genuinely with us and those that are not with us.‎ We have known friends, enemies and cunning individuals among us by this defection but we are not afraid of their antics as we remain united, strong and committed. We are confident of victory. We know God is on our side and we believe in him, we believe he will lead us to victory.”

While expressing confidence in the ability of the ruling party to come victorious in the September 22 governorship election, he observed that the defectors have lost sight of reality, assuring that APC would work hard to sustain the tempo of continuity which, according to him, could only set the state on the pedestal of all-round development.

Describing APC as the only political party that can turn around the socio-economic fortunes of the state and Nigeria for better, Aregbesola urged the electorate to vote for the party in all elections, just as he commended party loyalists for their resilience, doggedness and forthrightness before, during and after the party’s governorship primary.

He, however, lauded the Speaker, Osun State House of Assembly, Hon Najeem Salam, for always abiding by the party’s decisions, stressing that he had utilised his position to contribute effectively to the overall development of the state.