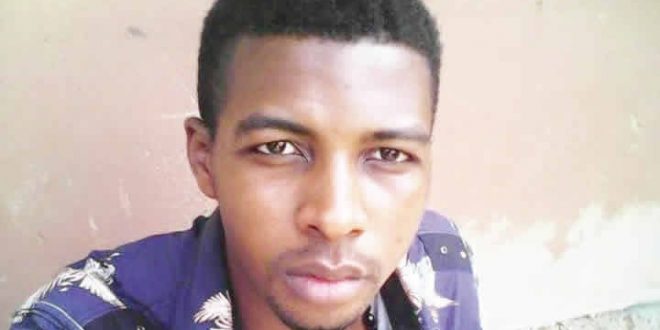 A 28-year-old bus driver, Abraham Umar, has been killed by suspected cult members at Cele bus stop, in the Ijanikin area of Lagos State.

The police said the victim was set up by his friend who was obsessed with his (Abraham’s) 17-year-old girlfriend.

PUNCH Metro learnt that Abraham, aka Abi, was eating at the girlfriend’s mother’s bamboo restaurant when the gunmen invaded the place around 9pm on Tuesday.

They reportedly shot the Benue State indigene in the head, killing him on the spot.

Our correspondent learnt that the case was reported at the Ijanikin Police Station and the girlfriend, identified only as Elo, was arrested.

A witness, who did not want to be identified, said the gunmen came in a group after Abraham, who plied the Lagos-Badagry Expressway route, parked his vehicle and went to eat.

He said, “He was with his conductor and the owner of the commercial bus when one of the gunmen tapped him on the back. Another one pushed him and slammed his head against the wall. Then one of them put a gun to his head and shot him dead. Everybody ran away.”

The victim’s sister, Aminat Umar, while fighting back tears, said Abraham’s friend, one Peter, broke the news to the family.

She explained that the victim had called her after parking his vehicle around 9.21pm.

“He said he was on his way home. About 10 minutes later, his best friend, Peter, rushed to our house, saying Abi had been shot at Cele bus stop and that his corpse had been taken to a police station.

“My mother and uncle ran to the Ijanikin Police Station, but were told that nobody was brought there. They went to a private hospital around Cele bus stop and were again told that the body was not brought to the hospital.

“The hospital workers said they should check the station. The police later admitted that he was there. I was told that his conductor and the owner of the commercial bus were in the cell,” she added.

Our correspondent learnt that the deceased lost his father, a former naval officer, when he was barely six years old.

His foster father, Muhammed Umaru, said Abraham had been receiving threat text messages from some men who asked him to stop his relationship with Elo.

He said, “They told him to leave the girl because she belonged to one of them.

“My son’s friend, Peter, said the young man behind the messages had once confronted them. I was told that the rival was dark in complexion and had dreadlocks.

“I told his aunt and uncle, who asked the girl to stay away from Abraham and also warned him to leave Elo alone. But they refused to quit the relationship.”

The deceased’s uncle, Sani Umar, described him as gentle and easy-going.

He said, “He was a calm man and never involved himself in any trouble. This incident is just unfortunate. The problem was that the girl he was dating had another boyfriend who is a cult member and that was why he was killed. We want justice; he must not die in vain.”

Elo, 17, who had been arrested by the police, however, said Abraham was her only boyfriend, adding that she could not tell why he was killed.

“He called me last night (Tuesday), saying he was going to my mum’s shop and if he could wait for me there. I said he should not wait because I was at my brother’s place in Ajegunle and would not be coming back that night. I told him that we were planning my brother’s wedding. On Wednesday when I got back home, I was told Abi had been killed. I don’t know about any threat because he did not tell me about it,” she said.

A source said cult killings were rampant in Ijanikin, adding that security operatives had not been able to curb the activities of cult members in the area.

He called on the police authorities to come to the aid of residents.

He said, “The cult members go into houses to kill people at will. Members of a family are still at a hospital after they were attacked by these boys. Two weeks ago, two boys were shot and killed at the bus stop because they refused to release their phones.”

However, Oti noted that Abraham’s best friend set him up over the 17-year-old girlfriend.

He said, “Abraham’s friend had a crush on the girl. It got to a point of obsession as he started talking to the man’s girlfriend to leave him. However, when he was not getting the desired cooperation from the girl, he set up his friend with some other guys, who killed him.

“The matter was reported at the Ijankin Police Station and immediately, the state Commissioner of Police, Edgal Imohimi, ordered the Divisional Police Officer to fish out the murderers. So far, the DPO has picked up four suspects, while the principal suspect, the one who had a crush on the girl, is still at large. We are on his trail and he cannot escape  justice.”