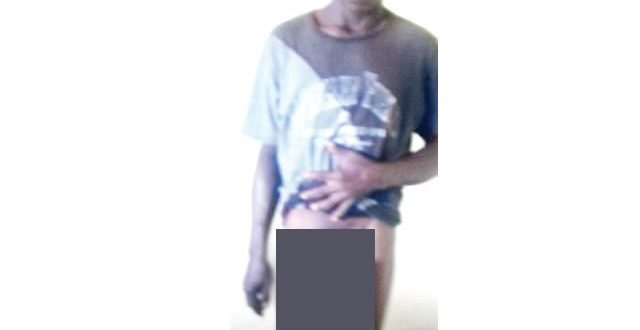 A 40-year-old man, Micheal Nna, is currently in a quagmire. While he hopes for the better, he lamented that his life has temporarily been ruined by a health challenge, which has not only made living a bizarre and excruciating  experience but also has robbed him of the ability of fathering a child. He added that he could not continue with his job as a shoe repairer, which had been his means of livelihood.

He is sad that no lady is interested in having any relationship with him as a result of  swelling of his scrotum, which has prevented him from performing any conjugal role.

According to Dr. A.N. Ado Wanka and Dr. F. G. Olah, both resident doctors at the hospital and Dr. Paul G. Jibrin, a consultant histologist, the problem has lasted for seven years.

The report from the doctors stated that “Patient with seven years history of progressive increase of scrotal sac swelling. Surgery was done three years ago on the same side at peripheral hospital. Presently, swelling is massive, located in the middle. Histological sections show a fibro-osseous lesion composed predominantly of fibrous within which are fragments of mature bony tissue. The fibrous tissue is cellular in some areas and acellular and  hyalinsed in other areas.”

A social worker with Lifeline Mission (a non-governmental organisation), Mrs. Blessing Godwin, said the patient had been operated in two different hospitals in Abia State without any recovery.She lamented that some people were rather taunting him.

She said the NGO had spent a lot of money to foot the medical bills of the patient, adding that as a result of financial constraint, the organisation therefore was pleading with the federal and state governments, as well as donor agencies, organisations and individuals to assist the patient to raise N2m for the operation, post operation management and rehabilitation.

She said, “He noticed that the place started swelling up with pains and his manhood is different from how it used to be. We took him to the hospital;  they said it was the enlargement of scrotum sack. We have gone to many hospitals in Abia State. Even now, he eats more than what he is supposed to eat as he feels hungry faster than normal. He has done the first and second operations. We did the first operation in Abia State and we thought that it had gone. But before a year and six months, it started developing again. We went to another hospital in the same state, yet the problem did not get solved. He should be going for the third one if we are able to raise  money for it. We plead with the  federal and state governments as well as organisations and individuals to help him raise N2m for the third operation and management. He really needs help so that he could go to another hospital in Nigeria.

“He is not married and he has no children. He is a cobbler. There is nobody to help him. People rather use harsh words on him and make him angry.”