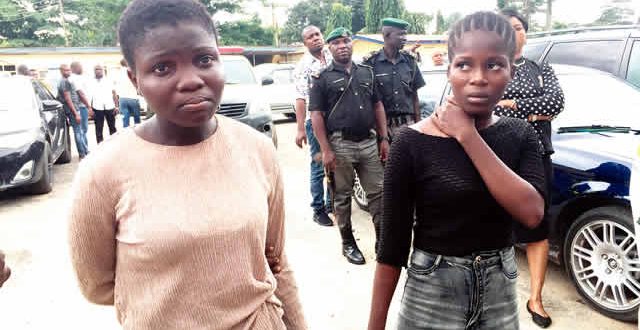 Operatives of the Lagos State Police Command have arrested Dorcas Adilewa for allegedly faking her kidnap to defraud her father, Taiwo Adilewa.

The police also arrested Dorcas’ friend, Ifeoluwa Ogunbanjo, for her alleged involvement in the fraud.

Nineteen-year-old Dorcas was said to have conspired with Ogunbanjo to execute the scheme and allegedly demanded N600,000 ransom.

The police said Taiwo had received a call from someone who told him that his daughter had been kidnapped and allegedly demanded the N600,000 for her release.

Taiwo reportedly informed the police about the kidnap of his daughter.

The Lagos State Commissioner of Police, Edgal Imohimi, during a press briefing on Monday, said he ordered the Anti-Kidnapping Unit of the command to investigate the case.

He said, “The kidnapper told the father that if he did not want his daughter killed, he should pay a ransom of N600,000 to secure her release.

“Investigation into the case immediately commenced and the phone number that was used by the callers was geo-located to the Ijebu Igbo area of Ogun State. The head  of the Anti-Kidnapping Unit led his men to Ijebu Igbo at about 10pm the same day and combed the area in search of the supposed victim till the following morning.”

Imohimi said, “The supposed kidnappers relocated to Ikotun in Lagos and the search party also moved to Ikotun to rescue the victim.

“When the fake kidnappers realised that the police were closing in on them, the supposed victim called the complainant to inform him that she has been released after she gave them the N8,000 the father sent to her bank account.”

The CP said Dorcas later confessed to have masterminded the kidnap, adding that she planned the kidnap with her friend, Ogunbanjo, who allegedly provided the hideout.

He said, “Dorcas confessed that she planned the kidnap with her friend, Ifeoluwa Ogunbanjo, who provided her with accommodation on Adeboye Road, Okesopin, Ijebu Igbo, Ogun State, as well as the mobile phone they used to demand the ransom. Her reason was that she wanted to extort money from her father.”

However, Dorcas said she needed the money to pay her school fee.

She said, “When the payment of my school fee was delayed, I went to my friend’s (Ogunbanjo) place, where I called my father.

“I was at her place on Thursday and I went back home on Friday when my dad said he could not afford the money.”

But Ogunbanjo said she was not aware of the kidnap plan, adding that she accommodated Dorcas at her parents’ house because Dorcas told her she had escaped from kidnappers.

She also said she gave Dorcas her phone to call her father because she said she needed transport fare to go home.

Ogunbanjo said, “It was because she used my phone to call that the police came to Ijebu. What she told me was that she entered kidnappers bus and that when she escaped, she came to Ijebu Ode.

When she came, my mum entertained her and the next day, my mum gave her N500. She needed additional N500 to complete the N1,000 she needed to transport herself home. So she said she wanted to use my phone to call her daddy so she can tell him to send her some money to transport herself. So I gave her, not knowing that she was using it to demand money from her daddy.

“She asked for my bank account number and I said I did not have. So, I went to meet someone beside my mummy’s shop to collect an account number. It is God that saved me that she did not use that person’s account number. I never knew that her daddy had sent N8,000 into her account and she did not tell me anything.”
The CP said investigation was in progress and on completion, suspects would be charged to court.