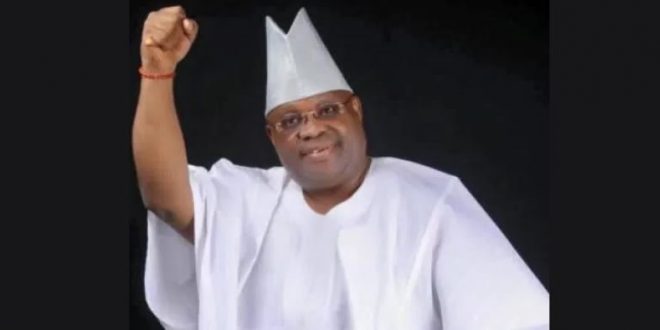 The Peoples Democratic Party’s member representing Osun West Senatorial District at the National Assembly, Ademola Adeleke has won the PDP governorship ticket for the September 22 governorship election in the state with 1,569 votes.

He defeated the Chairman of Mutual Assurance, Dr. Akin Ogunbiyi, his closest rival, who initially scored 1,559 votes at the first count.

Ogunbiyi’s votes increased to 1,562 after they were recounted.

A  former Secretary to the Osun State Government, Alhaji Fatai Akinbade, scored 52 votes while a Senior Advocate of Nigeria, Nathniel Oke, polled three votes.  A total of 56 votes were rejected.

Adeleke will contest the governorship election with the candidate of the All Progressives Congress, Alhaji Gboyega Oyetola.

Some of the aspirants announced their withdrawal from the governorship primary before the exercise, which was held at the premises of GMT Hotel and Events Centre, started.

Some of the aspirants, who announced their withdrawal from the governorship primary, were Prof. Adeolu Durotoye, a former Minister of Youth Development, Olasunkanmi Akinlabi and Felix Ogunwale.

The Chairman of the Osun State PDP Governorship Electoral Panel, Seriake Dickson, had a hectic time as he was almost on his feet throughout the duration of the voting, which ended at 7.30pm.

Dickson, who is the Bayelsa State Governor, had  earlier in his speech said the delegates would pick the most popular aspirant as the flagbearer of the party in the governorship poll holding on September 22, stressing that the panel would not tamper with the wish of the people.

He said, “This exercise will be free, fair, transparent and credible. The delegates will pick the candidate of the party. We won’t tamper with the wish of the people.”

Security agents had to fire tear gas canisters at the crowd towards the evening when some hoodlums, outside the venue, were said to have attempted to force their way inside.