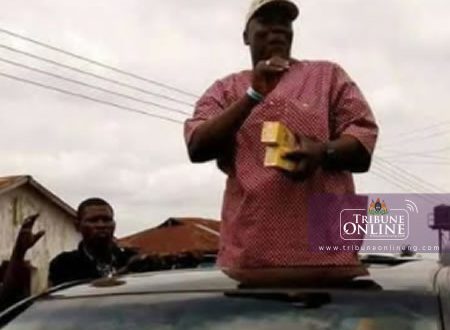 The battle to secure the governorship ticket of the All Progressive Congress (APC) in Osun, ahead of 2018 governorship poll assumed an interesting trend on Tuesday when one of the gubernatorial hopefuls, who is also the Speaker of the state House of Assembly, Hon Najeem Salam began distribution of Lipton tea, sausage  and sweets, most especially TomTom to natives of his country home, in Ejigbo

Nigerian Tribune authoritatively gathered that Salam, who mounted an open roof Sports Utility Vehicle (SUV) moved in a convoy, along major streets of his hometown, distributing the items to the people, who struggled to get from the Lipton tea, gala and sweets.
Though, Salam had not formally declared his governorship ambition, findings indicated that he had already began massive mobilisation and subtle moves to shore up his chances among gubernatorial aspirants in the APC, including the current Chief of Staff to the Governor, Alhaji Gboyega Oyetola, the Secretary to the State Government (SSG), Alhaji Moshood Adeoti, among others.
– Nigerian Tribune
Najeem Salam 2017-12-22
Dotun Olanibi
Share