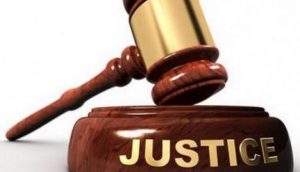 An 18-year-old boy, Saidu, who allegedly raped his eight-year-old blood sister (name withheld) has been arraigned before a Katsina Senior Magistrate’s Court.

The suspect, a Junior Secondary School student and a resident of Janbango quarters, Katsina, was charged for incest, which the Police said is contrary to Section 390 of the Penal Code laws.

In the charge sheet read before the court yesterday, Saidu was alleged to have lured his sister to a toilet within the premises of a steel rolling company near their house and forcefully had sexual intercourse with her.

The victim was, thereafter, reportedly taken to General Hospital, Katsina, for examination and treatment.

One Sergeant Sani Rabiu of the Central Market Police Station outpost brought the victim to the station after the incident.

Police prosecutor, Inspector Sani Ado, who asked for an adjournment, told the court that investigation was ongoing. Hajiya Dikko adjourned the matter till February 14.

@CitizenOsun
Previous Two to die by hanging for commiting  murder in Ekiti!
Next Pastor allegedly defrauds worshipper of N1.1m