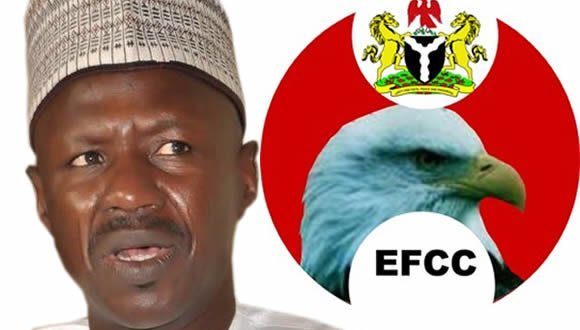 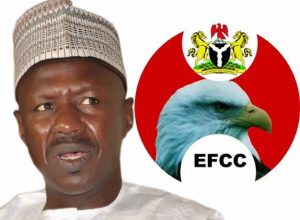 The Economic and Financial Crimes Commission has confirmed an attack on the property of the acting Chairman of the EFCC, Ibrahim Magu, which resulted in the death of a policeman.

The commission said this in a statement by its spokesman, Mr. Wilson Uwujaren, on Wednesday.

The property is not the current residence of the EFCC boss who lives in Maitama.

According to the anti-graft agency, the property, a farmhouse located in Karshi, a suburb of Abuja, was attacked by gunmen at about 10pm on Tuesday.

The EFCC said although it would not want to speculate about the motive of the attack, it would not be intimidated by anybody as it continues to tackle corruption in the country.

The statement added, “The unidentified men murdered a police sergeant on duty. The incident was the second of such attack on the same farmhouse.

“While the commission will not speculate on the motives for the attack or the sponsors, it wishes to state that the EFCC, under the leadership of Ibrahim Magu, will not be deterred in its mission to rid Nigeria of corruption.”

The property, which was attacked, was said to have been under surveillance by the Department of State Services and had even been searched on several occasions by the DSS for unknown reasons.

Although Magu has never been attacked since assuming office in November 2015, there have been attacks on the EFCC offices and the anti-corruption agency’s officials this year.

On June 24, 2017, an official of the anti-graft agency, Austin Okwor, who is attached to the Property Fraud Section of the EFCC zonal office in Port Harcourt, was shot while leaving his office.

@CitizenOsun
Previous ‘My wife accused me of infidelity, threatened to set me ablaze’
Next Obasanjo bags PhD in Christian Theology after 163 minutes drill