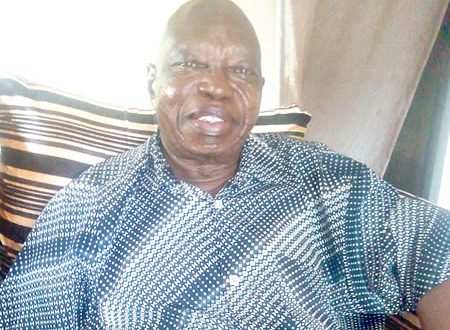 I’ve been sidelined from acting for 6 years —Lere Paimo

Lere Paimo, popularly called Eda Onileola, is one of the veteran actors whose works have stood the test of time. Despite the challenges that have come his way, Eda says he has every reason to thank God for a successful career, in this interview with SEYI SOKOYA.

You have not been active in movies in recent times?

I am still acting. We just finished a series that will be aired for a year by Galaxy Television. The drama series is currently running on the station, precisely on Thursday by 8:30pm. We are not resting, because we have already completed the series. Currently, we are warming up to embark on another drama series . The title is Omi Ogbon and it is full of wisdom as the name implies. I derive joy in producing works that will boost knowledge, affect lives positively and promote culture and values.

How did you get this offer?

The owner of Galaxy TV, Chief Ojo, who is a good friend of mine, gave me the offer. For someone to have given a year offer is not ordinary, but a true love. He even told us to bring a proposal for another one year series. So, you can see that I am not retiring.

Some people have suggested that you retire from acting since you are hardly seen in the mainstream filmmaking?

You are right. Despite the fact that I hardly feature in the mainstream these days, that does not mean that I have retired or quit acting. I can never quit; this is my calling and I will continue to act until God’s time. I turned down offers to feature in some works because some of them or the stories had no meat.

How do you mean by they lacked meat?

Some of the jobs did not have good messages and lacked cultural values. Except for Kunle Afolayan, who has good manners, he is the only person that I would not hesitate to work with if he calls me. Others don’t fear God and they don’t want to reckon with elders and this is why we have kept them in their space.

But it was reported that you were deliberately sidelined because you were causing problems in the association. Is the report true?

That is not true. Meanwhile, I am not the only person that is sidelined; Baba Wande and a couple of elders in the industry are also sidelined, because of association issues. The situation became messier when they left the indigenous association, the Association of Nigerian Theatre Practitioners (ANTP), to form the Theatre and Motion Pictures Association of Nigeria (TAMPAN). I made them realise that I would not leave ANTP that the late Ogunde founded. This is why they said they would not feature us again. So far, I have no regrets being sidelined from acting for about six years. I thank God for His faithfulness, because despite all these, I have not turned a beggar nor gone hungry. God has not turned against us. I have every reason to thank God, because their plans didn’t work. I have not lost my place as a veteran in the industry. Though I may not be wealthy. I appreciate God for what I have been able achieve in this profession and the good things He will still do for me.

What is your take on ANTP?

The association still exists and is formidable. I foresee an association that would have a selfless leader and well-committed members. Everyone needs to check themselves and ask questions whether what they are doing is right or wrong. We need to remove sentiments or selfish interest if we desire to let the association grow, as well as to leave a worthy legacy behind.

You travelled abroad recently. What informed the trip?

Contrary to the rumours doing the rounds that I went for a life-saving trip. I am hale and hearty. I was healthy and sound before I left the country and even when I returned, nothing has changed. Mere looking at me, did you see any sign of illness? No, I don’t care about what they say. I thank God for my life and how far He has brought me. Someone asked me to come and celebrate my birthday in America, because I had been celebrating it in Nigeria. I obliged and embarked on the trip. In fact, I really enjoyed my stay. Fuji star, Obesere was the one who played at all the events. From New Jersey, we went to Maryland, Atlanta and New York. They celebrated me in a big way and I felt honoured and returned home peacefully.

How would you describe your life as one of the living legends in the acting profession?

As I said earlier, I thank God for everything and I will continue to appreciate Him. My greatest joy is that I have been able to leave a legacy for the younger generation. Irrespective of what has happened, my footprints are indelible. Above all, I am still thanking God for the rare grace. I have enjoyed an uncommon grace from Him. My works are still speaking for me. Awards are countless. National awards too have added feathers to my cap. I remember when my great friend, fondly called Ebora Owu, a former president of Nigeria, Chief Olusegun Obasanjo, gave me a national award, Member of the Order of the Federal Republic (MFR), we both ate orogbo, bitter cola and chatted after the ceremony.

If you look back from where you started from, would you say that you are fulfilled?

Yes, I am. If one is able to cater for his family through his calling, he should be described as fulfilled. All my children are graduates, except my last born, who is still in higher institution. I also have a house of my own and a car. So what else can someone desire in life? I am only trusting God for additional blessings and long life in sound health.

What is your relationship with Jide Kosoko and others after the whole court case?

I have maintained a cordial relationship despite the fact that they mandated others not to feature us in films again. As an elder, I maintain my space, because it doesn’t move us an inch. They will even be troubled with guilty conscience, because they are also hearing about what God is doing for us. In fact, they must have seen that God did not abandon us. Personally, I bear no grudge against any of them. Take it or leave it, Jide is my son; I don’t have any grudge against him. He and his associate still greet and accord me respect anytime we meet. We are not fighting at all.

So far, would you say your popular movie, Ogbori Elemoso gave you what you expected financially?

I thank God so far, and it is time this movie would bear a bountiful fruit. A popular monarch in the country is ready to promote the work in a new dimension. He is planning to come up with a massive project that would involve both national and international faces in the movie.

What distinguishes you as a veteran actor?

I have nothing special. I just see everything that I have become and whatever I have passed through as a divine grace. I am not exceptional, because those that are better than me are no more. The only thing I feel I have and is special to me is that I keep records. I have about six diaries, which I have been using for six decades now. It will interest you that I have a full record of the cost and spending of my popular movie, Ogbori Elemoso. The entire spending on the production is documented and you would laugh to see the names of some popular actors in my diaries.

What is your take on the film industry today, precisely the Yoruba movie industry?

It is good that the industry is witnessing a tremendous growth, but we must not forget our root and the principles guiding acting. The Yoruba movie is special and we actors and stakeholders must not derail from the philosophy of our founding fathers. This aspect of film making is to project our cultural values and preach morals to the society. But the reverse is the case, especially what we see on screen today. Even the titles of some movies are nothing to write about. The mode of dressing of actors too is suspect. For instance, people hardly notice women who use beads in those days. Many young women nowadays derive joy flaunting waist beads in public. It is time we went back to our root and cultivate the habit of producing quality films that will impact lives positively. Though, my opinion may not count, because I have been blacklisted, my take will be on record. It is not as if all films are bad, but the good ones are very few. We need to be conscious of our film productions, because we are like a mirror to the society and we can easily influence minds with what we offer people.